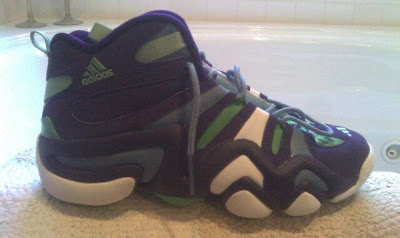 So I know last night I said I would probably rock some Reebbok's today but woke up this morning and decided that since it was Sunday and I doubt I'll be going anywhere of any importance I might as well wear these Adidas Crazy 8's which are pretty ugly to be honest. But they were only $20 at the Footaction Outlet so I couldn't turn them down. They retail for $100 so it was a great deal for an ugly shoe. The official colorway on the box is listed as purple/run white/powder blue which really means purple, light blue, white, & a mint green. Not a good look but maybe that was the reason they had so many of them at the Footaction Outlet they had to make them $20 instead of the usual $40 they normally would have been.

Now for those of you who are to young to remember or just don't know any better, this shoe is actually Kobe Bryant's first signature model shoe. Most people don't remember that Kobe originally signed with Adidas when he first came out of high school. Honestly most people probably don't even remember that he was originally drafted by the Charlotte Hornets (yes the team in New Orleans used to be in Charlotte) before being traded on draft night for Vlade Divac.

{Sidebar - What made the NBA think another team would work in Charlotte after the first attempt failed miserably? And then the team is so bad that they are bombing in New Orleans and the NBA had to buy the team and now it looks like they're gonna move yet again. If any city other then Seattle gets that team it'll be a huge joke, Seattle deserves them after the shady way Stern allowed the Sonics to be ripped away from those loyal great fans. And the owners wonder why they're all losing money yet never think of the way they just crap on the fans year after year. Just had to get that off my chest.}

Back to the shoes, the reason they're named the Crazy 8's now is that Adidas can't call them Kobe's anymore since he is now a Nike guy. Maybe if Adidas could still call them Kobe's the shoe would actually sell but as it is these shoes show up to the Footaction Outlet in droves every time they are retroed. The guys at Sneakerfiles.com had a posting a few weeks ago about Adidas reissuing them again this year and they still won't sell. Makes it easy to understand why all these other brands are so far behind Nike. But at least by the time I start buying shoes again next year they'll be nice and cheap at the Outlet for me.

By the way, still pissed about the way my Falcons got completely dismantled last night but hopefully they'll be able to solve their defensive problems this offseason. Hoping for a Seahawks upset tonight just so my brother & new brother-in-law don't have room to talk. That's all for now, might follow this up later so check back, Cheapsoles.
Posted by cheapsoles at 7:52 AM