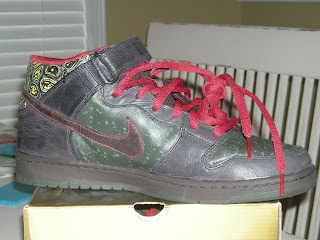 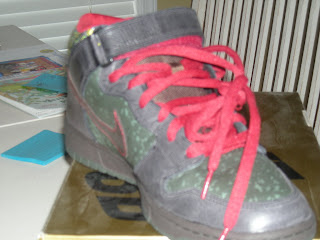 So today I decided to pull something out of the stash to help prove my credibility with any sneakerheads who might happen to read this little blog thing I've started. These are the Nike Dunk Mid Premium SB "Moats". For those of you who don't understand the SB part that stands for skateboard and is Nike's skateboard footwear line. These shoes are sold exclusively in skate shops and in limited numbers. They are also available on the secondary resale market for well over the original price in most cases. This particular model is called the Moat because they were in honor of the annual Moat Race at the Skate Park Of Tampa. The shoes released in April of 2008 exclusively at the SPoT and wear limited to only 100 pairs. They retailed for $90.00 and are currently reselling for between $125 & $150 on the secondary market. I purchased my pair for $125 from a skateshop in Norfolk VA in December of  '08 and think it was money well spent as they only produced 100 pairs of these total.

I do have to mention that one of the best things about the Nike SB's is the box they come in. The SB boxes are practically indestructible as opposed to the garbage boxes all other Nike's come in. I mean seriously, Nike is charging us an arm and a leg for most shoes and they boxes keep getting worse and worse. My SB Dunks all stack nicely on top of each other while all my regular Dunk boxes have completely caved in on each other and I might have to install some shelving just store them without destroying the boxes. But this is what Nike does to their customers, they make certain products in great colorways, great boxes, & great presentation while just watering down other shoes with terrible colors, lame boxes, and massive overproduction which just waters down the market. Then again, I keep buying the shoes so guess maybe I'm the one who's the idiot and Nike knows what they're doing after all.

I also want to make sure this doesn't sound like I hate Nike because I really don't I just think certain policies and practices they have aren't in the best interest of their customers, however they are much better then the rest of the companies. Adidas doesn't understand that unless it's the Superstars, Campus, or Samba's most people don't really care about the rest of their shoes. And Reebok might have made some inroads with their Zig Tech line but aside from that the rest of their stuff just sits on the shelf. They signed John Wall to a huge deal then put out those ugly shoes for him that nobody wants. What it seems a lot of these companies don't realize is that people can't afford to spend tons of money on a pair of shoes that are great performance shoes but look like crap. That was what made Jordan's so great back in the day, they were great on the court and looked great on your feet. That's why people still love them to this day and they're Nike's best sellers. The new stuff companies are dropping might be great for the court but people can't drop $120+ on shoes that are great on the court but are to ugly to wear everyday. Oh well, enough venting and complaining for the day, Cheapsoles.

PS. Follow me on twitter @cheapsoles to keep updated on new posting
Posted by cheapsoles at 11:43 AM