Been a hectic week, kids off Friday, company coming today (the 24th), plus great NBA games one right after another so a little behind but should knock most of last week out in this post. Let's get to it then. 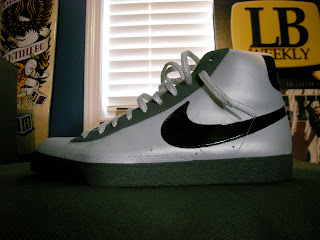 Bought From The Footaction Outlet Columbia SC
Still got a few pairs of Blazers to finish off but this was the last pair I wore. Rocked these last on the 15th as I ran a few errands and chilled at the house. Had this pair for a while now. Very simple but hot colorway. The silver (soft grey) is understated and works well with the black patten Swoosh with touches of orange in the heel tab and the bottom sole. Just a nice Blazer that I don't see worn much here in Columbia so that's always a huge bonus. Don't remember there being more then two or three pairs at the Outlet during that time. 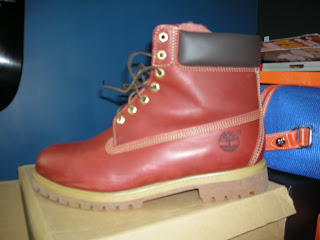 Saturday the 16th  the weather was really crazy, pouring rain one minute then bright sunshine the next. My 6 year old son said the weather was in pattern and he was right. Didn't want to rock a Blazer in that mess so grabbed these Timbs since they were already in the closet and I didn't have to go to the garage. Another example of the great savings at the Footaction Outlet. I have three pairs of $150.00 Timberlands I got from there and the most I paid was $50.00 per pair. Hard to turn down any color boot at those kind of savings. Especially when it's this nice brick red colorway. Only colorway that doesn't come thru there is the OG Wheats. I do wish Timberland would reissue the old school Jodeci era combat boots they used to sell. Every time I watch old videos on RetroCentric it makes me wish I could run across a pair. Something about them calls to me. 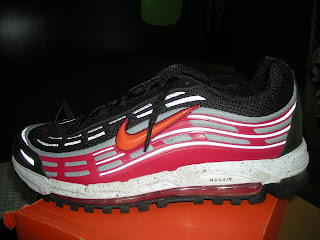 So I think I've mentioned before my feelings on the Nike Air Max TL 4 so you shouldn't be surprised that I copped these TL 2.5's when I saw them at the Outlet. Threw these on Sunday since I knew I didn't have alot of plans other then watching the NBA Playoffs and maybe making a grocery store run at some point between games. These are the only 2.5's I have as opposed to five pair of TL 4's I own. There looks to be several colorways of this shoe on the Internet but this was the only colorway to make it to the Outlet. Part of the same package as the Terra Humma's I wore earlier this year. You can see the influence of the Air Max '97 in the design of the 2.5 but this shoe looks to be a little more rugged and built for more for outdoor off track running. Easy to clean and very supportive. Nice shoe I would recommend to any runner. Sold a few pairs when I had my business. 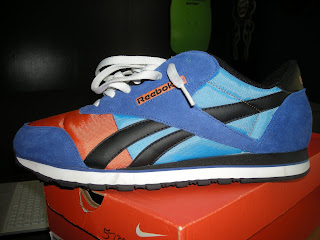 My daughter picked these for me as we left for school on Monday morning so this was the NonNike Monday shoe last week. Just another pair of the Roland Berry designed Reebok I got for dirt cheap back when all the Non Nike Shoes at the Outlet were 85% off.  Nothing special even though Reebok really tried to make it special by bringing in Roland Berry to design the colorway. Didn't help, still a Reebok. 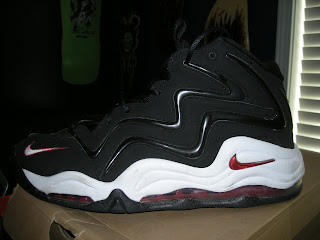 Had to go to the V.A. Hospital in Augusta GA and figured I might hit a spots while I was there plus some spots when I got back to Columbia so rocked these Pippen's that day. Great buy from the Outlet and a classic colorway in this shoe. Nobody down here buys the Pippen's like that so they always end up at the Outlet. Not sure if it's the retail price or if cats down here don't realize what these shoes are. Back when these originally came out these shoes were huge. Of course anything having to do with the Bulls was huge at the time. Still think Nike / Jordan should do a Jordan / Pippen package in a special colorway. Would be hot and real sneakerheads would love it. Now that I've rocked both pairs of my Pippens gonna put them up in the closet and move the Penny's I haven't worn to the garage so they can get in the rotation. Miss the days when so many players had great signature models we could actually buy as opposed to every player wearing the same shoe in PE colorways the public will never own. Not sure what Nike's thinking sometimes.

Aight, kids are home so that's all for now. Finish this up later today or tomorrow morning once the kiddies are off to school. Till then, Cheapsoles
Posted by cheapsoles at 9:01 AM 66 comments: