﻿ I had planned to wear a pair of Nike Air Diamond Turf's today in honor of Deion Sanders being elected to the Hall Of Fame yesterday but I have no plans to leave the house today so I figured why waste a great pair of shoes on a stay home day. These 2's are kind of an around the house pair to me. I got them for free (well almost free, traded some mix Cd's which cost me next to nothing) so they don't really rate to highly to me. Plus I'm one of those guys who doesn't think that lows count as real retro's. I only have 2 pairs of Jordan retro lows in my entire collection, these 2's and a pair of the white 8 lows. I've already explained why I have the 2's, the 8's were a pair I bought when I was young and didn't know any better.

This topic is actually a big debate among certain sneakerheads. Most think like me, the only Jordans that matter are the Retro's, not Fusions, not lows, not SE's and not Jumpman's (Team Jordans). I have never owned a pair of Fusion's and have no desire too, no matter how cheap I can get them for at the outlet. I will admit to owning a pair of Spiz'ike's (the Nelly's a/k/a Cactus) which I only got due to the high demand and the fact they only coast me $60.00. I also own a pair or Jordan Trunners (DTRT pack) which are a leftover from my shoe selling days. I also have some Melo's and CP's but I consider them to be a signature model along the same lines as the Kobe's, Lebron's and Durant's. But some people don't care, as long as it says Jordan on it they want it. These are the same people who used to buy True Flights from me like the were Retro 7's. They want Fusion's because it comes in a fancy box and has an AF1 bottom. They just don't know any better and I made plenty of cash off their ignorance. 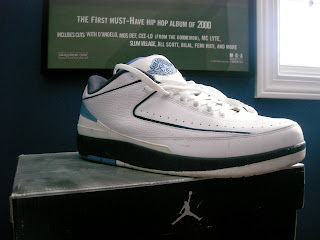 These 2's originally retailed for $100.00 and the official colorway is white / midnight navy / university blue. They've been beaten and worn by me but still hold up pretty well. The Jordan 2 was a very important shoe as it was the first model to not feature the Nike Swoosh. I happen to like the 2 and rank it fairly high on my list of favorites. Those of you with a keen eye will notice the top of the box. It is the older box which had the silver Jordan face on it. Can't remember what year they stopped doing that but I will be very honest and admit that very few of my boxes go back that far. By the way, poster on the way is from Common's "Like Water For Chocolate" CD and is signed. Perks of owning a records store years ago.
Well that's all for today, just going to kick back, clean a little, watch all the pre-game shows, and get ready to watch Green Bay and Aaron Rodgers just make Brett Farve feel even worse and more pathetic then he already does after his flaming pile of crap season this year. Till then, Cheapsoles
Posted by cheapsoles at 11:42 AM