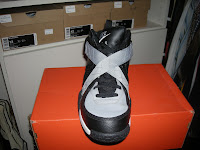 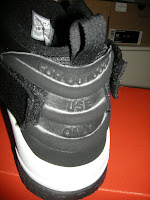 The story behind the Air Raids actually begins with Reebok. Reebok had just released their Blacktop collection and Phil Knight told legendary shoe designer Tinker Hatfield to design an outdoor shoe for Nike. Tinker went to the playgrounds and asked players what they needed and designed the Air Raid as a result. Spike Lee was hired to promote the shoe and Tim Hardaway was used in the ad spots. Due to Spike's upcoming film Malcolm X some people wrongly assumed the straps across the shoe were in homage to Malcolm X but they were really just a design feature to stabilize the shoe.The ads for the Air Raid were crazy with lots of loud colors and one spot even featured a direct lift of a scene from Spike's film "Do The Right Thing". Some people refer to the shoes as "Malcolm X" and some people, like me, simple call them the Tim Hardaways but neither is technically correct. The shoe had nothing to do with Malcolm X and Tim Hardaway never wore them on an NBA court. These shoes were designed for outdoor use and literally say so on the back heel.
I know I said yesterday I would try to get some pics of some women's shoes from the Footaction Outlet up today but that was before I volunteered to bake some cupcakes for my son's school so I'm spending the day baking in the kitchen. And I make my cupcakes from scratch not from a box so I actually have to put in a little work. The only problem with making them from scratch is the mess they create. But thanks to my wonderful sister-in-law I have a great food processor which made the mixing alot easier then it used to be. Just have to decide if I want to use store bought frosting or make my own. I'll let you know tomorrow. 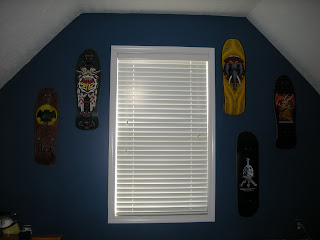 The bigger issue I'm debating is on what wall do I want to put the NOS (new old stock) Powell Peralta '91 Steve Caballero "Mask" deck I just got in. I have about 7 skateboards hanging on the walls in the room over the garage (my room, or at least that's what my wife likes to pretend it is) along with various items leftover from my days as a record store owner. On the back wall I have 3 Powell Peralta reissues on one side of the window and 2 vintage decks (a Steve Saiz Powell and a "Jinx" Vision) on the other side. Just trying to decide if I want to keep all the vintage decks together or do I want to put the Caballero "Mask" on the wall beside the Caballero "Dragon & Bats" reissue. I have pics below so maybe you guys can offer some advice. Plus if any of you guys have some decks in decent shape laying around feel free to let me know. Would love to add more so the wall. Till tomorrow, Cheapsoles
﻿﻿ ﻿﻿