﻿﻿Todays shoe is the Big Nike High Premium QK "LBC" or as I like to call it, part of the leftovers. This is a shoe I bought at the Nike Outlet in Myrtle Beach SC in several sizes for $25.00 (retail is $90.00) to resell when I had my shoe business. When I decided to liquidate my stock last May and closeup I still had this shoe left in a size 12 so I figured why not keep it. It's not like I didn't pay for and I did have several shirts to match it. Plus I knew that no one else in Columbia would have it since it was a west coast exclusive and was never released down here.And let's be honest, we all like having things nobody else has right? The Big Nike, yes that the name of the shoe, is one of Nike's '80's era basketball shoes that nobody really seems to care about or pay much attention too but Nike for some reason decided to bring it back a few years ago. This is one of those shoes that's old but isn't considered a retro, kind of like the Dunk or Blazer. As a matter of fact, now that I think about it, only Jordans get the retro tag. Nike just reissued the Nomo's and it doesn't say retro anywhere on the box and it hasn't been out in over 15 years. Just another marketing game Nike likes to play. These Big Nike were part of the LBC / ATL pack which consisted of  two pairs of Big Nike's. This pair in White / Black / Varsity Purple with a large LBC on the heel in place of the standard NIKE (hence the name Big Nike, I know, it's so stupidly simple) while the ATL pair were in the Atlanta Hawks colors and had ATL across the heel. They also replaced the Nike 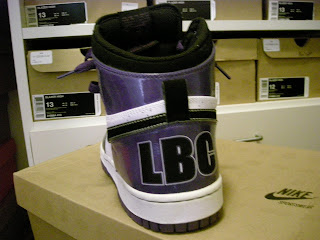 Logo on the tongue with the logo of the city on the heel. Neither shoe has any sort of resell / aftermarket value, they are Big Nike's after all. It's just one of those shoes in the pile that I might throw on once or twice a year if I happen to see the box on a day when I have on a purple shirt. My daughter loved them this morning when I broke them out because they had purple in them like her AirMax so that makes them worth wearing today. 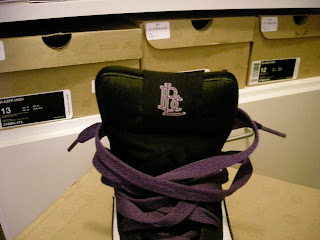 OK, so here's my thing with Pretty Woman, and yes I'm talking about that movie women (especially white women, just being honest) love for some reason. Do you people get that Julia Roberts character Vivian is a whore, prostitute, hooker, streetwalker, whatever you want to call her. Not a escort, not a call girl, a hooker. She stands on the corner and services any guy who comes by and pays her. How can you act like it's such a great love story when you know if your son, brother, father, uncle, whoever showed up with some girl he meet tricking and said he was in love with her and was going to take her off the track and marry her you would all kick his ass. But because people like to pretend Julia Roberts is beautiful women seem to overlook her character's whorish past. And don't say it's because I'm a guy, I happen to enjoy dumb predictable romantic comedies. Love Actually and Notting Hill are two of my favorite movies. Even junk like The Proposal and Two Weeks Notice are watchable to me. Hell I even enjoyed Sleepless in Seattle and You've Got Mail so you can't use that excuse. And don't get me started on Dirty Dancing, that movie kicks all kinda ass, but Pretty Woman, seriously? It's not a bad movie but how is turning a ho into a housewife an epic love story?

Last thing, I need some really good spaghetti sauce recipes. And no just open a jar jokes either. I want some old school family recipes to experiment with so if anybody has any hit me in the comments section. Till tomorrow, Cheapsoles.