So according to my records it's been 23 days since I bought my last pair of shoes and I'm going through withdrawals when I see something hot. Skipping the "Cements" was a little easier then I thought, it's been the stuff on sale I've seen that's been the hardest to pass up. Plus stuff like the "Gortex" SB Dunks at Bluetile or the black and purple Penny 1's that dropped since then have been calling me. But I'm determined to make it through this year without buying myself any shoes and using that money to make our 15 Anniversary something special. Of course nobody believes I can do, not even my wife. Every time I tell somebody I'm taking the year off they say I'll never make it, then say that's so sweet when I explain why I'm doing. But then they still say I can't do it. The bad part is that as much as I hate to admit it they might be right, this might be one of the best years ever for Jordan Retro's and Nike Retro's. The "Concord" 11's and "Black Cement" 3's that were just confirmed almost killed me. With all the 5's (my favorite Jordan by the way), 7's, and 3's dropping this year I know it'll be hard not to slip. When you add in the Foamposite's, Penny's and various Air Max's dropping this year I'm in for a rough time. The only thing I have to look forward to is knowing that by the beginning of next year there will plenty of shoes at the Footaction Outlet for me to get for cheap. The only problem might be the fact that the guys in the back room up there like to hold back the best stuff for themselves. Not that upset about that if it's the guys who actual were my size but there are the guys in the back who just hold whatever is hot and limited to flip online or at the flea market no matter how against company policy that is. And feel free to say I'm dry snitching, I don't care. Don't come out and ask me what a shoe is reselling for then tell me you have it in my size bit your getting it for yourself and expect me not to be pissed.

They should have plenty of various Air Max 90's and Nike Basketball Retro's up there as these shoes just don't really sell in this area. Even shoes like the Griffey's and Penny's just sit on the shelves. And shoes like the Pippen's and 1/2 Cents are just to expensive around here. Plus most of the people here have no idea what they are so they just sit. Of course if Nike slaps a Jumpman logo on it they'll snap it up thinking they just bought something super hot. Makes me kind of sad when I see Jordan True Flights being snapped up but the metallic Griffey is marked down to $99.99. 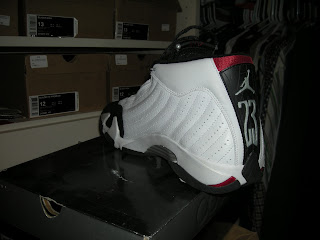 Anyway, today's pair is the Air Jordan Retro XIV (14) in the white / black / varsity red / metallic silver colorway. These dropped in March of 2006 and retailed for $150.00. I got them a while later at Todd & Moore's for $75.00 on clearance. Nike Jordan really flooded the market with this retro back in 2006 and several colorways made it to the clearance rack. I can remember going into a Footlocker in Norfolk VA and seeing 5 different colorways on the wall at once which was crazy. I didn't even think the shoe was that popular when it first dropped to require that many retro's to begin with. This is evident by the fact that the retro versions from 2006 are only $150 at http://www.flightclub.com/ and an original pair from 1999 is only $220. 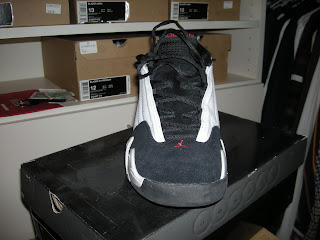 Some of this could from the fact that it seems like people like to hate on any Jordan after the XIII (13). For some reason the 13 is the cut off shoe for loving everything about Jordans with a lot of sneakerheads. Don't really understand it because I happen to really like 17 through 20 models. After the 20 it is a little touch and go I'll admit. The 14 was supposedly inspire by the Itailan sportscars Jordan loved andif you know what to look for you can see the influence. The tongue and heel plate are the most evident examples. Oh well, that's enough for today. Might rock some AF1's tomorrow since the guys on Facebook told me to rock the Jordans today over the AF1's. Till then, Cheapsoles.
Posted by cheapsoles at 9:45 AM