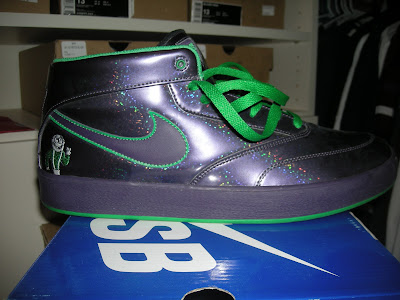 Since today is Nike SB Friday I went with the Omar Salazar "Dinosaur Jr's" which dropped in march of 2010. These were designed by members of the Alt Rock group Dinosaur Jr who had some fame in the 80's and early 90's and have developed something of a cult following. The shoes are the second collaboration between Nike and the group. The first were the Nike Dunk High's which came out in 2007 and are currently reselling on www.flightclubla.com for between $260 and $400. The official colorway on the Omar Salazar's are abyss / abyss / lucky green and they retailed for $85.00. They are currently available on several websites for right around $99.00 which I find surprising given the high resell value of the Dinosaur Jr Dunks. I think the main reason for this is that the Salazar's are new shoe with 2010 being their first year along with the fact that while Omar Salazar is a pro skater he's not a known pro skater. Plus the shoe was not really well recieved by the sneaker community (and let's be honest, sneakerheads are the main buyers of SB's not actual skaters). 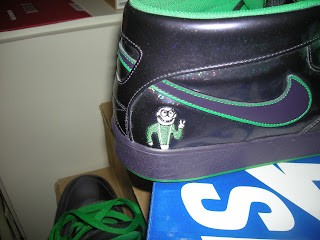 The shoes are a nice purple with a bit of sparkle to them which changes the shade of purple depending on your angle and the lighting. The Dinosaur Jr logo is placed on the heel similar to the Dunks from 2007. They also placed a tree monster image on the insole. There is also a zipper along the top of tongue which can be used to add padding to the tongue for protection or for a nice little stash spot. Not that I know anybody who needs to stash anything but just repeating what I have heard. 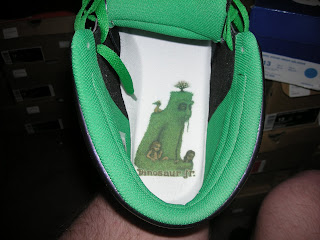 I plan to go buy the local skateshop here in Columbia today to see what is new and whats on sale this week. They also carry several other brands of skate shoes which I'll be sure to mention as well. Make sure you check back later to get the report and pics. You never know what you may find there that everyone else has sold out of. Till then, Cheapsoles
Posted by cheapsoles at 9:16 AM