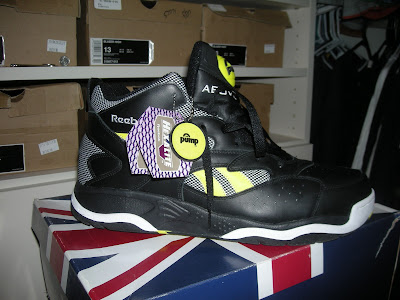 So I decided that from now on I will make Mondays my day for wearing the shoes in my collection that aren't Nike brand (which includes Jordan Brand also). For the first entry I went with these Reebok "Dee Brown" Pump D-Time's. This pair is the black / white / yellow colorway which was not one of the limited colorways hence the plethora of them at the Footaction Outlet last year when I picked these up. These retailed for $100.00 and I got them for $30.00 just to throw in the stash. These were Dee Brown's signature model from Reebok which he got after gaining fame in the "91 Slam Dunk contest in which he defeated Shawn Kemp (if it was a baby making contest Kemp would have slaughtered him) mainly do to the hype he created from "pumping up" his Reeboks before each dunk. His signature dunk, in which he covered his eyes, was used for the logo on the heel tab. 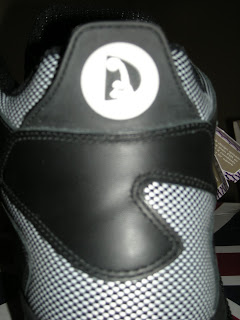 These were originally released in 1993 at the height of the signature model frenzy. The late '80s & early '90s were a time when athletes of all types were able to get signature models from all of companies. Grant Hill & Jamal Mashburn signed with Fila people, if that doesn't tell you how easy it was to get a deal nothing will. By the way, the Fila Mashburn's were H.A.M. for those those of you who are to young to remember them. Patrick Ewing even shunned Adidas and other brands to release his own model thru his own company and did rather good going the indy route. {Sidenote - I would love a pair of those Mashburn Fila's or the Larry Johnson Converse's if anybody has some size 12 or 13's they want to get rid of.} That was a great era for sneakers and all the companies could learn a little something from going back a taking a look at that time period. It's not a coincidence that the shoes from that era are what Nike seems to sell the most of these days are all always retroing. The shoes then were worth the money & the effort back then. They were great for the court (or gridiron, or diamond) and were great looking to rock in the hallways of school. I know I probably sound like some old geezer talking about how great the old days were but if I was wrong then you guys wouldn't line up for every new Jordan retro or get so excited whenever some long forgotten signature model gets retroed by Nike or the other brands. Hell, people are starting to get hyped for the Hiedo Nomo retro Nike is dropping this year and while he did throw 2 no-hitters most people have no idea who he is. That speaks to the love for the shoes of that era.
Well that all for now, I'll be back later with that complaining post I've been promising for the last two days. Till then, Cheapsoles
Posted by cheapsoles at 12:30 PM