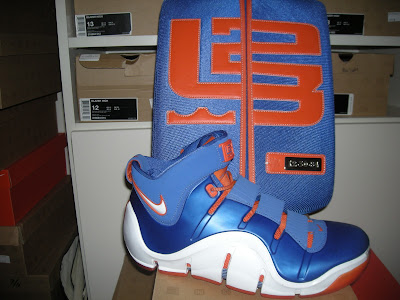 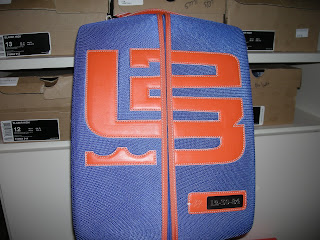 Today's shoes are the Nike Zoom LeBron 4's in the limited edition Birthday colorway. These released in 2006 and were a Nike.com members only exclusive. Nike.com used to have a members only store which you had to join on the website and sold exclusive shoes in the members only area. This was later dropped and Nike started the invitation only Flight Club on Jumpman23.com. This area is still open and is now available to anybody who wants to join but they haven't released anything in a very long time now. The last thing I remember getting from them was the "Incredible Hulk" CP3 II's.  These LeBron 4's are officially listed as dark neon royal / white / safety orange and contrary to what some people think when first seeing them, they are not in a Knicks colorway. The colors are a tribute to the old Cleveland Cavilers team colors of the 80's and 90's. If your old enough to remember you know exactly what I'm talking about and if not next time you see a replay of "The Shot" check out the Cleveland jersey's as Jordan just kills the franchise until LeBron showed up. The shoes came in a special zip up shoe case instead of the standard shoe box. The box zips down the middle and each pair came wrapped in special paper. The box also had a stamped metal plate with LeBrons birthday. This is one of the few pairs I can't remember the price of but the general release LeBron 4's retailed for $140 and these were slightly higher. I saw a pair on Flightclubla.com recently going for $300. I have to agree with something I saw written on some website that they resale on these had to be a lot higher before "The Decision" and the delusional Knicks fans thought they had a chance at him. Maybe I'll wear the Amare AF1's tomorrow as a consolation prize for Knicks fans. As for the shoes themselves, these are pretty unique and they were rated quite highly as a performance shoe in 2006. 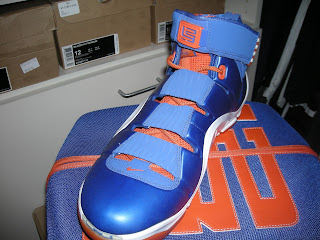 These are one of only 2 models of the Lebrons in which I own more then one pair. I have 2 pairs of these and 2 pairs of the LeBron 1's. All the other pairs are the only pair I own in that particular model. So I guess that might say something about what I think of this model. Aight, that's enough writing for now. Got to head out and check out whats on sale at the Footaction Outlet and DTLR today and throw that up later this afternnon. Tomorrow is SB Friday and I plan to go by the local skateshop and let you know what's on sale there. They also have plenty of stuff that most places are sold out of. That's why guys drive down from ATL to shop there once a month. Till this afternoon, Cheapsoles
s
Posted by cheapsoles at 8:08 AM