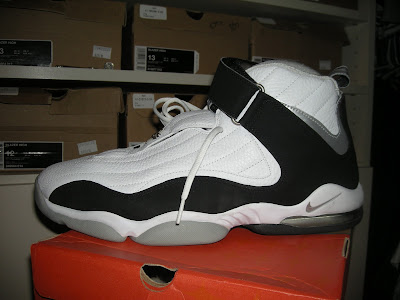 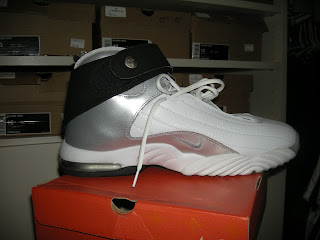 Today I decided to grab a pair of Air Max Penny IV (4)'s out of the stash upstairs to rock. These are the 2006 retro's in the white / black / metallic silver colorway. The originally retailed for $120.00 but I picked them up at the Nike Factory Outlet store in Gaffney SC for only $20.00. A few words about the Nike Outlet stores, you can find some nice deals in there at times but when you are used to prices at the Footaction Outlet they are few and far between. But I always make sure I visit them whenever we're traveling and stop in a town where they have one of those so called "outlet malls". For those of you to young to have seen Penny when he was with the Orlando Magic with Shaq you need to hit you tube and take a look. He was a beast when he burst on the scene. Plus Nike had an amazing marketing campaign which featured the puppet Lil' Penny who was voiced by Chris Rock. This was back when Nike ruled the marketing world with brillant campaigns for all their athletes.
The Penny 4's are the over looked Penny's to me. People love the 1's and the 2's. The 3's are popular in the rights colorways and I don't have to mention the love we all have for the Foamposite's do I? But the 4's don't seem to get the love that the rest do. I'm somewhat guilty of it myself, I put the 4's as third on my Penny's list behind the Foams and the 1's (I don't put the 1/2 Cents in this group since they weren't a actual signature model). These haven't been retroed since 2006 and I don't remember them being big sellers then so I doubt they'll see a reissue anytime soon. Especially with the Penny 1's getting the full retro treatment this year. Yet another reason my 15th anniversary fell on the worst possible year. But I will have lots to look forward to next year at the Footaction Outlet. Till later, Cheapsoles 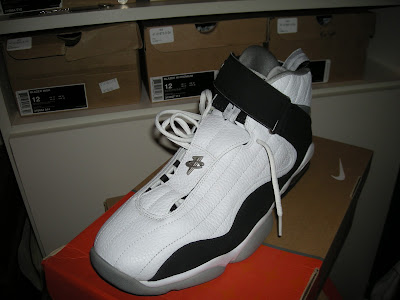