Just wanted to say that if your a recovering drug addict or alcoholic and you were upset at the way I was talking about having withdrawals yesterday, to damn bad. Not my fault you got hooked on something and screwed your life up. I know that me talking about being addicted to sneakers might not sit well with you but oh well. For sneakerheads like me, shoes are a form of addiction. We scour the Internet looking for the latest news and rumors. We make friends with all the employees at Foot Locker, Foot Action, Finish Line, and every other sneaker spot in our town. And we show up at insane hours of the morning to be first in line and to ensure we get our pair before they're gone. So I'm going to keep using words like withdrawals, shakes, and addiction and if you don't like it don't read. 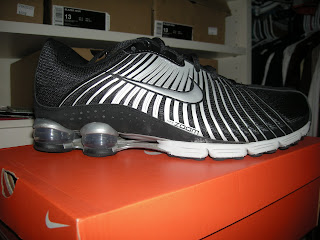 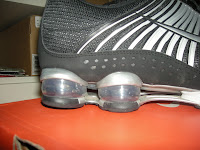 As for today's pair, it's a lazy Sunday today so went with a pair of Shox that were sitting in the upstairs closet with other pairs I picked up on a whim and only have one pair of. I never was and I'm still not a big Shox guy, especially the basketball line. They just looked ugly and didn't flow to me. Now the women's Shox are a different story, Nike crushes it on the women's side but the men's just don't click with me. This pair caught my eye at Foot Locker because of the Air Max technology in the Shox "springs". As a huge Air Max guy I was instantly hooked (it didn't hurt that I was able to get them for half price thanks to a former Foot Locker employee and their employee appreciation 50% off discount either). They retailed for $140.00 (in case you failed math that means I paid $70.00 for them) and were released in 2009 if my memory is correct. The colorway is listed as black / metallic silver/ black and these are equipped with Nike's + technology which allows the wearer to sync them with their ipod during their workout. Since I don't exactly run around in my shoes, or walk in them for that matter, I can't attest to how well this function works but it must be ok since almost every Shox comes with it nowadays.
That's enough for now I guess, the second half of the game is about to start (Heat @ Thunder) and Lebron, Wade, and Durant are can't miss TV. By the way, want to give a special nod of respect to Kevin Durant for his signature model shoe with Nike. For a guy to have a signature model priced under $100 (the Zoom KD III is only $88.00) is refreshing and very surprising. Kobe's shoe is $130, LeBron's is $160, and Melo's is $130.00, CP's is $118 and Wade's (I consider the Jordan 2011 his shoe, he's the face of the signature model for JB) is $170. Granted the KD III might not be as technical as the the other guy's but it's a solid basketball shoe and actually looks great too. Just wanted to mention that while it was on my mind. Oh yeah, if you guys have Facebook (and who doesn't) or Twitter do me a favor and post the link for the blog for me. Would really appreciate it guys. Till tomorrow, Cheapsoles
Posted by cheapsoles at 11:52 AM