So I know last week I changed the schedule and set up which days I would be posting new blogs and then I didn't follow through on it but I do have some valid reasons. The Friday post was delayed due to my father-in-law coming down for the evening and my wife being sick as a dog that night. Then on Monday I had to go to the VA Hospital in Augusta GA for some new equipment and then yesterday was just really hectic so I just decided to bundle it all together and do a huge post. Plus I have also decided that from now on I won't try to follow a schedule, that I'll just post when I can and make this fun again as opposed to feeling like a job. 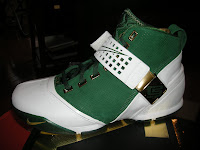 So since last Thursday was St. Patricks Day I went with these Zoom Lebron V (5's) which were a Nike Member's Only exclusive back in 2007. These were a Limited Edition pair for Lebron's birthday. These were the last birthday pair and the colorway was inspired by Lebron's high school team, St. Mary St. Vincent. Just wanted to rock a little green on St. Pat's day plus I was going to see my second favorite dental hygienist and wanted to wear something nice. Especially since that day was her last day as a hygienist. next time I see her she'll be signed to a major record label and on her way to becoming a huge country music star. By the way, my favorite hygienist would be my lovely wife who normally cleans my teeth but was a little busy this time. I was smart enough to make the appointment for 10:00 that morning so I was home in plenty of time to catch every game that day. 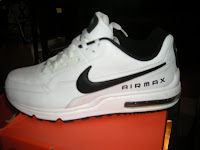 Since I had no plans of leaving the house on Friday I just threw on some simple Air Max LTD's in a simple black and white colorway. Something I wouldn't feel bad about nobody seeing. I did make an early morning Publix run before the games started but the shoes were decent enough for that so I didn't mind. I normally don't rock LTD's but I bought this pair to resell and grabbed them out of my stock on day when I went out after shutting down my tables for the evening. Just grabbed them and a shirt from the stock and went to dinner. It's not that I don't like the LTD it just doesn't appeal to me the way the '90s, 95's and TL4's do.
Saturday (3/19/11): Air Jordan 9 Retro (Silver Anniversary Edition)
Colorway: White / Metallic Silver
Cost: $150.00 / Paid: $150.00
Purchased From: Finishline.com 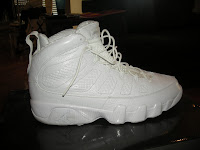 I had originally planned to go to Aiken Saturday to watch the games with some friends and hangout that night since my wife and children were going to Rock Hill NC to spend the night with her family but since she was sick Friday evening she didn't feel up to going so I stayed home that day. I had put the Retro 9's on before she changed her plans so even though we didn't do anything that day I was rocking a very nice pair of Jordan's all around the house. Just grabbed them when I saw the weather outside I just felt like wearing something that had a summer feel to them. The reason I got these from Finishline.com was that the weekend they dropped my wife and I were in Atlanta and I didn't feel like fighting with the crowds there. I just went ahead and ordered them to ensure I wouldn't miss out on them. Of course, when I went out the day they dropped I realized getting them wouldn't have been a problem. They didn't move quite as well as I had expected, or as Nike Jordan probably expected either. The reason could have been that Nike Jordan dropped three Silver Anniversary Edition Models on the same day. Each model was exclusive to a certain store which probably spread dollars a little thin. Just another in the long line of great decisions by Nike Jordan.
Sunday (3/20/11): Nike Dunk High
Colorway: Neutral Grey / White / Light Charcoal
Cost: $80.00 / Paid: $30.00
Purchased From: Footaction Outlet Columbia SC 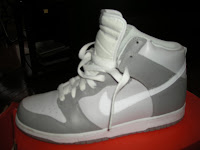 On Sunday my wife and children left around 7:00 AM to go see her dad and family in Rock Hill. I headed up there a few hours later to meet up with her so we could go by the Ikea store in Charlotte to check out a couch for my room upstairs. We didn't find anything we liked and I didn't want to wear anything to great to Ikea so I just grabbed some simple Dunks in a neutral colorway. Just wanted to throw on something comfortable for the drive and easy to move around in since I would be testing couch's and getting in and out of my chair. Just a simple Dunk for a simple day.
Monday (3/21/11): Puma Grit Cat III
Colorway: Black / Coffee Brown
Cost: $90.00 / Paid: $13.50
Purchased From: Footaction Outlet Columbia SC 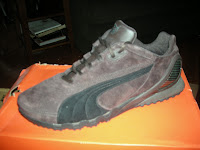 Still sticking to my Non-Nike Mondays rule so thanks to my lovely daughter I ended up wearing these Puma's I've had for several years this Monday. When we leave on Monday's I always have on my socks and pick a pair of shoes from the stack of non-Nike's. Well on Monday when I was trying to decide what pair to wear my daughter told me to get a red box so I grabbed these and made them work for me. It worked out in the end, the shoes dress up very nicely and I wanted to look good while visiting the VA so they would be more inclined to help me out. While I was in Augusta I went by Augusta Mall to see what all they had in the stores there and was not impressed. Went in a CCS for the first time and hated it. Not the type of skate store I would ever shop at. Just a bunch of posers who know nothing about skating or shoes working there selling clothes to kids who want to look like a skater without actually skating. 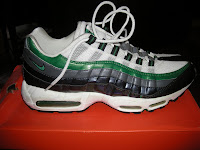 These are the first pair of Air Max '95s I ever owned. I originally bought these to flip at my shoe spot but after about two weeks nobody had bought them and they were calling my name. At that time people down there weren't checking for Air Max plus they weren't looking to pay the $65.00 I was looking for on them. Of course less then six months later all anybody wanted were Air Max so I went with the 90's which were a lot cheaper and moved quickly. The 95's are my third favorite Air Max after the 90's and the TL4's.


That's enough for now. I'm trying to get caught up today so hopefully there will be at least a Pt. 2 posted later this evening. Just depends on how crazy things are later tonight. Till Then, Cheapsoles