So I'm back with Pt. 2 as I try to catch up on my posts. Not going to waste a lot of time with excuses and reasons so let's jump right into it. 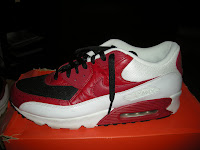 Just a simple pair of Air Max 90's on this day. I was kind of rushing that morning and I knew this pair would be easy to match so I just grabbed them. I have several pair that I keep handy for just that reason. I always know I can match them easily so when I'm in a rush or am just being lazy I grab a pair of those to make life easy. I do like this pair thanks to the faux Ostrich leather on the varsity red toe and side panel. Plus the mesh toebox is a very nice contrast with the white patent leather on the side. And let's be honest, it's hard to make a bad AM 90 right? It's just a timeless classic shoe. 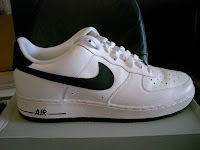 Not going to lie about this one, I was going to grab a pair of shoes from the garage on the way to loading my daughter in the car that morning and she pointed at this box and said to wear these so I did. I have actually done it several times since as I'm trying to make a dent in some of the pairs out there. Just a simple white and black AF1 I picked up at the outlet for cheap. If memory serves I grabbed them because they were one of the few pairs in there that were $30 since these dropped before the price increase. Nothing special about them in the resale market but it is a nice clean shoe that can be dressed up with the right shirt. I wouldn't buy it for retail price but at $30.00 who would turn it down? 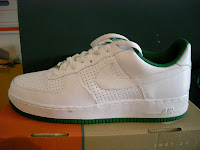 This pair got picked for me the same way Thursday's pair did, I let my daughter pick them and she went with the orange box this time. This pair was purchased back in June of 2006 when they dropped. That was back when AF1's were a line up Saturday release before Nike ran them into the ground again. These caught my eye thanks to the perforated leather. Just made the white look a little different plus the green looked good and is easy to match. Honestly can't remember the last time I wore them. Seem like most of the AF1's I had to have back then are just sitting in the garage now. I do have to admit though, looking at them now after all these years, these are a hot shoe. Plus the leather and bottoms seem to have held up pretty nicely. No yellowing at all. 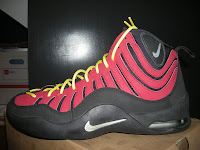 Went with these cause we were going back to Charlotte to look at more couches and I wanted something with a little sizzle (pun intended) since I would be out and about. To me this shoe will always be considered Kevin Garnett's signature model however it was also rocked by Tim Hardaway at the same time so some consider it his signature shoe. Neither is wrong so why argue. These do have the standard Nike Air logo in the back as opposed to the original air logo which appeared on this shoe when it was scheduled for release in 1998. That logo appeared to Muslim groups to spell Allah not Air and they forced Nike to change it and destroy hundreds of thousands of shoes which were already made. There are versions with the original logo out there and they command huge money on the resale market. 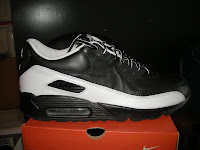 These are the first AM 90's I ever bought. The black and white leather grabbed my eye and I had to have them. After that it was all downhill, I now own more AM 90's then any other shoe with the exception of Nike Dunk SB's. The AM 90 is my favorite shoe Nike makes. Just something about it speaks to me. Simple clean lines and great colorways keep it fresh no matter how old it gets. They are  one of the few shoes I don't mind paying full retail for even if I know I can wait for them to show up at the outlet. Plus this Sunday was a great day. VCU stunned the world and beat Kansas down and my Kentucky Wildcats continued their run to a championship knocking off UNC. It's always great beating them too when you consider the history of both schools and their place in college basketball.

Enough for now, fingers are getting tired. Till Pt. 3, Cheapsoles
Posted by cheapsoles at 1:21 PM