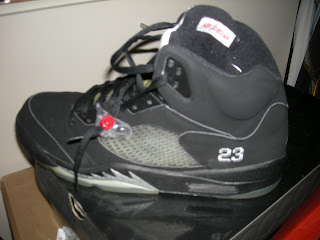 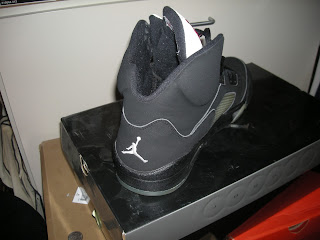 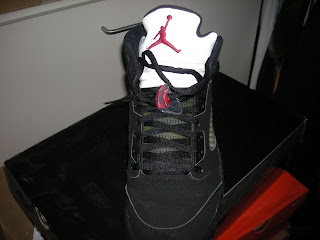 I'm going to dinner tonight with some of my oldest friends, guys I've known since high school and in one case middle school so I figured I better step out in something a little better then some Blazers or Dunks so I decided to go with these Jordan Retro 5's in the Black / Metallic Silver / Fire Red colorway. These were retroed in 2007 and were first released in 1990. That was right in the middle of my high school years and I remember being jealous of everyone who had these. The Jordan 5 is my all-time favorite Jordan and this colorway is my favorite. Something about the black and silver along with mesh net side panels and the iconic shark fins just makes this shoe a thing of beauty. The shark fins were inspired WWII fighter planes and these were the first Jordans to incorporate the use of shoelace toggles. This version includes the silver 23 on the side also. These retailed for $135.00 when they were retroed in 2007 and are reselling for between $210 on www.pickyourshoes.com (very limited sizes) to $250 on ebay.
So tomorrow is the NBA All-Star game and the Daytona 500 which makes for a busy and fun day. Pulling for the East team in the All-Star game but I have a feeling Blake Griffin might have his coming out party this weekend. Just have this feeling that he might pour the emotion from the death of his old high school teammate into his performance tonight and tomorrow. But I just think the East Squad is loaded and Lebron and Wade will have a real point guard with Rose and just show out.
As for the 500, that's wide open thanks to the new pavement. This will either be very exciting or extremely boring. I know there are lots of people pulling for Junior and I get it this weekend with it being the 10 Anniversary and all but seriously, has there ever been a guy more loved who's done less then Junior. If he had a different last name he wouldn't even have a ride. Yes his dad was one of the greatest but that doesn't mean you have to have undying love for a guy who isn't any good. Oh well, enough for today, till tomorrow, Cheapsoles.
Posted by cheapsoles at 11:49 AM