Sorry this is going up so late but it's been a long day. Went to dinner with the family for my sisters birthday plus had a ton of errands to run today. OK that's a lie, I went by the Footaction Outlet and got my wife some new Nike Shox Navina's then went by DTLR and argued over who was a better point guard, John Stockton or Isiah Thomas and completely let time get away from me so this is the first chance I've had all day to write anything. I had Isiah by the way, he sucks as a executive but he could ball back in the day. People forget how great he was because of the massive screw ups since he retired but he was crazy back with the Pistons. 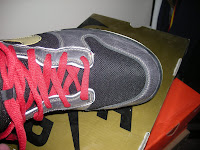 So today's shoe is the Nike Dunk High Premium SB "Marshall Amps". These were inspired by the famous Marshall Amp that is used by musicians worldwide. The mesh toe is a ode to the grill covering the speaker while the gold is based on the gold lettering used on the amp. These released January of 2008 and sold for $110. They are reselling for as low as $115 on ebay to as high as $225 on www.flightclub.com. Personally, I would be a little skeptical of the pair for $115 unless they were used. That price seems very low since the average price seemed to be between $150 to $190. Not saying they are fake or anything just saying it seem a little low to me is all. Maybe the guy selling them just doesn't know the market. Keeping this short for tonight, got to get up early tomorrow plus I'm tired. Check back tomorrow since I gotta show out a little. Going to dinner with some old friends from high school so I gotta show up with something nice. Till then, Cheapsoles 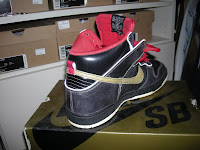 Posted by cheapsoles at 8:09 PM