Before I get to today's shoe I have a few thoughts and gripes about last nights Grammy Show. First, quit bitching about Justin Bieber not winning Best New Artist. He shouldn't have been nominated in the first place. His first cd came out in 2009 and went Platinum with 4 hit singles. That would mean he's not a new artist in 2010. Plus Esperanza Spalding is really dope and deserved the award. Second, Justin & Usher's performance was nice but after the performance that B.o.B., Bruno Mars, and Janelle Monae gave it just seemed ok. That B.o.B., Bruno, and Janelle performance was just amazing. The spin Bruno put on "Grenade" made a great song even better (can we get that version on iTunes please), B.o.B. did his thing and showed why he's the smartest decisoin T.I. ever made. And Janelle Monae just crushed it, huge energy, great voice, and stage pressence, that performance will hopefully make her the star she desrves to be. I also want to thank Puff / Puffy / P. Diddy / Diddy / Puff Daddy / Sean Combs, whatever name he's using right now, for not doing his usual meddling with his artists and leaving her alone.

The Lady Gaga performance was a huge let down, I'm not a huge fan of hers but I've always admired her for the craziness of her performances, but last night was tame and dull. The biggest thing I noticed about the whole thing was the fact that she totally ripped off Madonna in her song. "Born This Way" sounds almost exactly like "Express Yourself" and almost every entertainment blogger I read said the same thing. Even Madonna's brother talked about it last night before the Grammy's were over. The thing I asked on facebook last night was if Lady Gaga is a bootleg Madonna then what does that make Ke$ha? If your a rip off of a rip off what are you? I thought the Eminem performance was really good even if the Dr. Dre part was not all that great. Eminem just seemed to have a fire in him and spit his verses with passion. Rihanna and Drake were pretty good but I gotta think Beyonce want her outfit back from Rihanna. Those granny panty booty cutter shorts things she had on are a Beyonce trademark. Mick Jagger showed all the kiddies how it's done and reminded everyone that the Stones started with the blues.

As for that opening Aretha Franklin tribute, it was pretty good and introduced a lot of people to Florence from Florence and the Machine but it was also a lot of over singing by Christina. And seriously, why does she look so old all the sudden? Like I said after the Super Bowl, she looks like Cyndi Lauper all the sudden. Babies and divorce do not sit well with her. Arcade Fire closing the show was cool even if the way the Grammy's did it makes it look like Arcade Fire knew in advance they were going to win. If Eminem had won would Arcade Fire have still performed a second song? Just looked fixed in hindsight. But hey, they had Matt Hoffman out there on the stage so not going to complain to much. 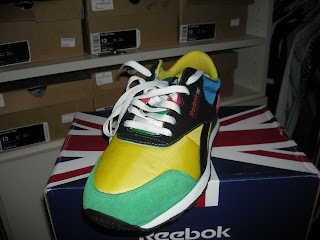 Now on to today's shoe, nothing to special, just some Nylon Reeboks from the Roland Berry collaboration they did a few years ago. Roland is a street artist who I honestly know nothing about but I liked the shoe so I bought it. Plus they retailed for $69.99 and I got them for $10.50 at the Footaction Outlet so if I only wear them once or twice I got my money out of it. I would love to find some old school Cross Colours shirts to rock with these but that will probably never happen. I just like all the bright colors in these and that they always get a reaction from a few people. They are the ultimate 90's colors shoe. They just remind of my high school years and the crazy gear we used to rock back then. Oh well, enough for now, got to clean up before taking my daughter to the Doctor later today. See you guys tomorrow and Happy Valentine's Day, Cheapsoles.
Posted by cheapsoles at 7:39 AM