﻿﻿﻿ ﻿﻿ Lot of random stuff for today so might as well start it off with today's shoe. Rocking the Nike Air Carnivore in the Light Zen Grey / Black / Oxidized Green / Purple colorway. They retailed for $110.00 and that's what I paid for them at Foot Locker. When they were retroed last it it was the first time they had been released in 17 years. The original release was in 1993 so this retro has some meaning to me as that was my senior year in high school and I remember when these dropped. I got these the week they dropped (didn't feel the need to get there at 6:00AM that Saturday, they weren't selling out that fast) and have loved them ever since. Almost any shoe Nike retro's from the '90 to '94 era I end up having to get just from the memories of those days plus I couldn't afford them back then and I can now. My wife says that's why I have most of the shoes I have. She's probably right, most wives usually are.

Went to Bluetile Skateboards yesterday to see what was new and to get an update on the "Statue of Liberty" SB's. The word I got was that the "Liberty's" were pushed back to next month and that Nike dropped the J-Pack Dunk Quickstrikes this month instead. These were limited to right around 2000 pairs and are so limited Bluetile only got 6 pairs. They are currently going for around $140 on eBay and they just came out this week. They also have some Blazers they just put on sale for $60.00 and still have sizes in the Gore-Tex Dunk Highs and in the "Yellow Curbs", "Koston Low's", "Miller High Lifes", and "Loons". Most of those are selling for $129.99 on www.pickyourshoes.com which is over retail. I attached pics below of the best stuff still available up there and suggest you get up there soon as you can to scoop up gear that's sold out everywhere else. Just make sure you let them know I sent you up there. ﻿﻿Their number is (803)376-1880 in case you want to give them a call. ﻿﻿﻿ ﻿ 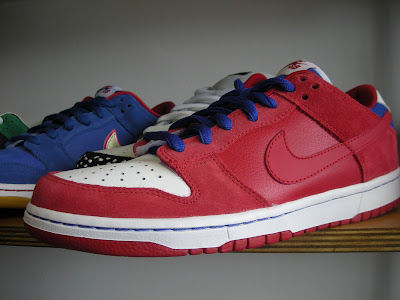 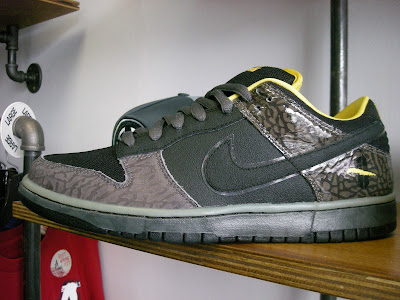 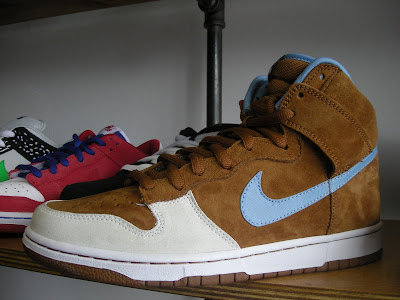 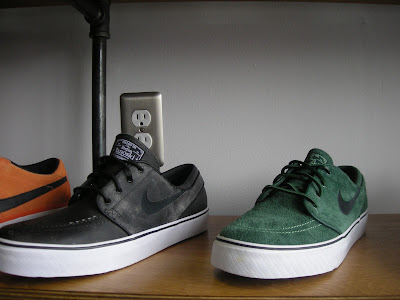 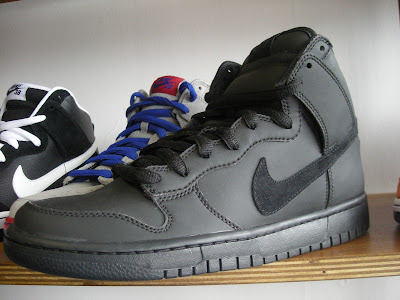 Now on to the random thoughts stuff, Charlie Sheen on the Dan Patrick Show this week has been amazing. Dude may be be a train wreck but he's funny as hell and has a great, dark sense of humor. The Knicks are idiots if they trade for Melo this year. He wants to go there so just wait and sign him in the off season instead of gutting your team to get him. And the Lakers would be taking a step back if they traded Bynum for him. All Melo does is score, he can't rebound, can't defend, just score. Heard from a lot of people that the Royal Foamposites that dropped last weekend were garbage quality. Nike doesn't seem to care about the quality of the retro's since they know we'll buy them regardless. The new stuff like the LeBron's is top quality since they actually have to sell them to us. Can Powell hurry up and reissue the rest of the Bones Brigade decks for us old school guys. Need a few more for my walls upstairs. Can Nike please reissue the "Gloves" and the Air Flight Hurrache's? Why do the call that trash on VH1 "Hip-Hop Girlfriends" when three of the five women on there aren't anybodies girlfriend much less a rapper's girlfriend? Same with those "Real Housewives" show, most of those stupid tricks aren't married so who's damn wife are they? And why is Jennifer Aniston still considered a star? She makes horrible movies that bomb at the box office and is only in the news because she is constantly getting dumed by the men she dates. Yes she was in a huge TV show but that was a long time ago, nobody is running around still calling David Schwimmer a star are they? And how come Angelina is always called a home wrecker by women but Alicia Keys gets a pass by the same ladies? Alicia broke up a happy family too. Oh well. my head is starting to hurt so I'm done for today, Cheapsoles
Posted by cheapsoles at 8:32 AM