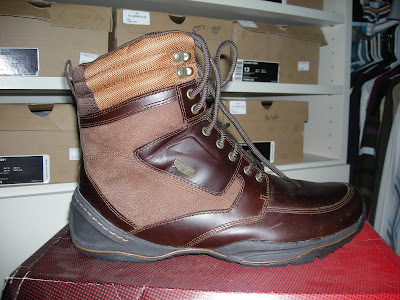 It's raining again so I had to say forget Nike SB Friday, I'm not about to ruin some of my good stuff out in this nastiness. Plus I'm taking my wife out to Ruth's Chris tonight for dinner and SB's don't really fit in with that vibe so even if the sun was beaming probably would have gone a different route today anyways. For those of you who don't know, Ruth's Chris is a high end steakhouse so you do need to be a little dressy for it. We usually try to eat there about 2 or 3 times a year, especially since my sister lives here in town now and has no life so babysitting is fun for her (just kidding with her in case she reads this, she does have a life and really just loves her niece & nephew). The food is excellent, but to be totally honest, I do prefer Morton's but only by the slimmest of margins. 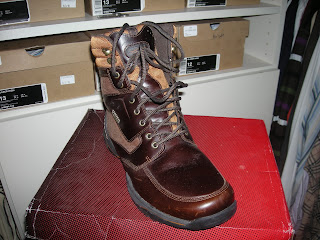 I ended up just deciding to go with these brown Rockport XCS boots for the day. They're waterproof and just dressy enough to get by with a nice button up or polo shirt tonight. The official name for them is "Concrete Canyon" and they retailed for $140.00. I paid $19.99 for them at the Footaction Outlet as this was another shoe in their failed attempt to enter the dress shoe market. The really bad part is a few months after I bought these they went down to $9.99. Of course by then all the 12's and 13's were gone so I guess I shouldn't complain a whole lot. This is another shoe I bought for myself and really like but knew better then to jump on a bunch of them even when they dropped to $9.99. I knew from past experience with my customers that they just wouldn't sell, even if I priced them at $35 to $40. Guys down here only were two kinds of boots, Polo and Timberland. Even the few Nike boots I had at various times took a little while to move. The only other boot I ever sold in a decent amount were some old school Fila Wu-Tang Clan boots I came across (and yes I have a pair in my stash) which the old heads scooped up to feel young again. That's the drawback to living in a spot like this, people take awhile to except something new or different or they just take forever to let certain things go, like the AF1. Oh well, until later, Cheapsoles.
Posted by cheapsoles at 11:19 AM