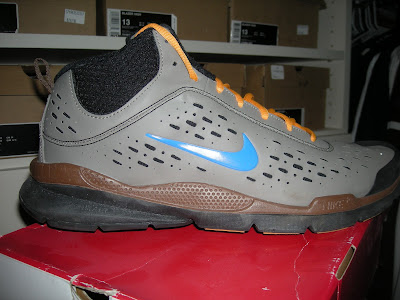 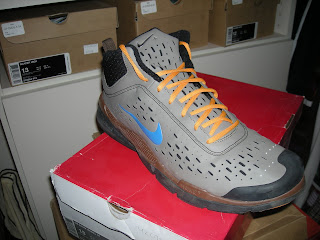 ﻿Today's pair is based on the weather report I got this morning so hope you weren't expecting anything to spectacular. Went with the Nike Air Zoom Moire+ ST which is a winter running shoe Nike markets. They are extremely lightweight and are a waterproof rubber material which is what interested me about them when I saw them. Contrary to what a lot of people think about this area of the country, we get a fairly heavy amount of rain in the months of March, April, and May and that's when these shoes come in handy. The fact that they retailed for $110 and I got them for $16.50 at the Footaction Outlet didn't hurt either. This was during the lean times up there when they would have only one table of Nike's a day. Most people slept on this shoe because it does look a little weird and the bulk buyers (people who buy in bulk to resell) knew they would be difficult to resell. To be honest I looked at them for several days before I decided to get them. It was on of those things where I was there and wanted to buy something and that was all they had in my size so I said what the hell and went home with theses funky brown shoes. Technically they aren't brown, they are bison / harbor blue / olive grey with orange laces to really give them a pop. Of course that shoelace pop does make them kind of hard to match sometimes but that's part of the challenge of being a sneakerhead. Most people buy clothes then look for shoes to match them, guys like me buy the shoes then hope we can find a shirt to match them. 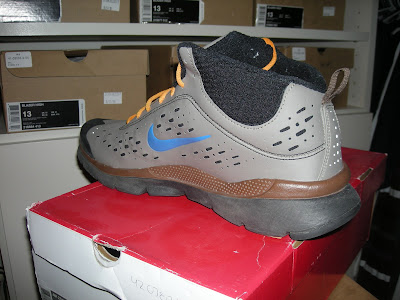 Well that's all for now. Going to run a few errands later and try to see what sales all jumping at the different sneaker spots and hope to throw another post up on here later today. See you then, Cheapsoles
Posted by cheapsoles at 7:43 AM