Back In The Saddle, Well Not Entirely But I'm Getting Closer

So here we go with the rest of the catching up posts. I realized when I looked at the worn shoes pile that I had to many pairs in the post for the week of March 28th thru April 3rd. Aside from that everything else was correct so let's continue getting caught up. 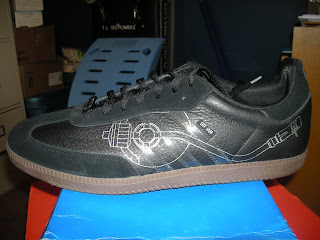 Rocked these on Monday April 4th for all of about 30 minutes when I went to get some food. My wife and kids were still in Norfolk at that time and I had got back from Atlanta around 4:00 AM so I had no intention of doing anything more then laying around the house and relaxing. When I got hungry and realized there was nothing in the house I just grabbed whatever non Nikes wear laying around the house and headed out the door. In a way I guess I wasted a really hot shoe on a throwaway day but I have plenty more. Do love the Def Jam logo all over the shoe. As somebody who grew up during Def Jam's heyday these shoes probably mean a little more to me then you youngster's. Do your research and maybe you'll understand. Plus it's a Samba and those look good in almost any colorway, A true sneaker classic. 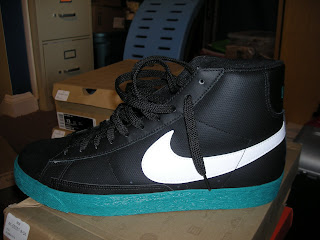 Wore these last Tuesday when I went to get a massage at my chiropractor's office from one of the massage therapists on his staff. She did an amazing job as usual and I didn't have much else planned for the day so wore something easy to match and put on. The family was coming back that day so I needed to clean the house and that was the most important part of the day. Love the colors on these, the emerald on the sole really pops especially against the black. Missed out on the AM90's in this colorway. Got these Blazers the same day I got the Ohio State's from last week plus the pair I have on today. At $30.00 a pair up at Outlet it's almost impossible for me to turn down any pair of Blazers I see up there. 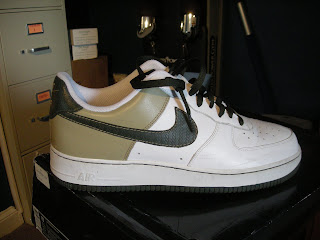 Think I wore these either Wednesday or Thursday of last week just not sure which day. Just a throw away pair of AF1's I have laying around upstairs. The box got destroyed at Footlocker before I bought the shoes so these shoes have kind of become a pair of errands, yard work, cleaning up shoes. They really appealed to me when I got them and matched some shirt I owned at the time so I got my money's worth out of them before regulating them to secondary status. Whichever day I didn't wear these I wore the Hyperdunks from the last post so we'll be jumping to Friday with the next pair. 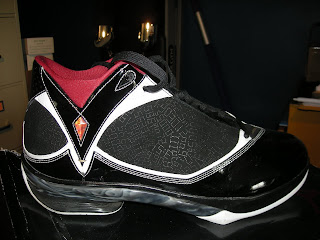 So I pulled these out to wear Friday when I went to the chiropractor and ran some errands with the family. Not sure where all we went but I wanted to wear something a little classy and no matter what people think of the Jordan 2009 but the HOF colorway looks really sharp with the patent leather. Wore a nice Ecko polo shirt with the shoes and some dark jeans and the shoes really popped. Plus it's hard to turn down $200.00 shoes for only $60.00. Add to that the fact that I didn't have any 2009's and needed a pair for the collection and why not these. The HOF pack also included yet another Retro 1 (seriously, somebody tell Nike Jordan we don't need any more Retro 1's for about 3 years or so. They have flooded the market with them and it's time to take a break.) and a pair of 6 Rings. I don't wear 6 Rings (gimmick shoe for high school kids) and I have enough Retro 1's so this is the only pair from the pack I got. I like the shoe and think it looks nice in this colorway (only this colorway by the way). I already have my eye on some 2010 colorways that I'm sure will be at the Outlet next year. If anybody actually wants a pair of these pickyourshoes.com has them for only $134.99 in almost every size. 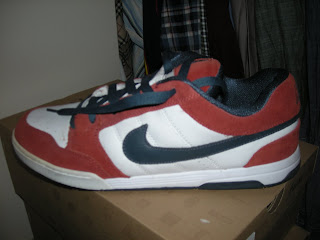 I have now real info on these shoes other then I got them while on vacation in Orlando about 4 or 5 years ago from a Nike Clearance Store for only $10.00. Just saw them on the shelf and grabbed them since they were so cheap. Threw them on last Saturday to wear while watching the Masters and the race at the house. Just something to wear in when I have no plans at all now. Only pair of Morgans I will ever own as I hate them. I hate most of the 6.0 line for that matter, just a bunch of fake SB stuff for the posers who shop at Pac-Sun.


Enough for now, finish catching up tomorrow.  Till then, Cheapsoles
Posted by cheapsoles at 11:35 AM