So today is the day I finally get caught up on this blog. And I was serious about loving this new couch up here, so comfortable and finally able to really enjoy my hideaway room for the first time since we bought the house 5 years ago. Got the Wii hooked up so I can stream Netflix, mini fridge is stocked, old laptop is hooked up to the speakers and got Pandora Radio going so I am all set. Let's plow thru this last couple of days left. 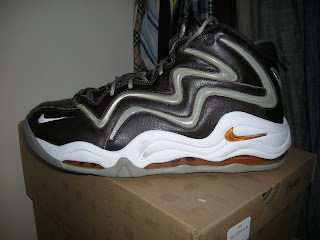 Threw these one because I knew the brown would go great with the green Masters polo shirt I was rocking for the final round Sunday. Sat at the house and watched the drama unfold as Tiger made his run, Rory melted down, and Charl pulled it out with an amazing birdie-birdie-birdie-birdie finish. Not the best final round ever but in the top ten. As someone who grew up in Aiken Sc which is right across the Savannah River from Augusta GA, The Master's is something I can remember watching all my life. Nobody in my house played golf and we never watched any other golf but The Master's was special. As for the shoe, these were Scottie's first signature model and are a great looking shoe in other colorways but not this one. The only reason I bought them was because they were only $40.00. The brown works on lows,or maybe even a Dunk Hi or AF1 Hi / Mid but not on a basketball shoe like this. Too much shoe for this color. But if you dress it up you can get away with it on occasion. 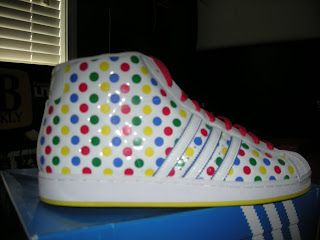 Grabbed these Monday since they were laying in the bedroom and I needed something that wasn't a Nike to wear. Plus I still needed to due my laundry and let's be honest, these shoes will match all kinda stuff. Just a funky little Adidas that was on sale for $19.99 so I couldn't pass it up. I've always called them the WonderBreads and most websites do also but every so often I hear somebody call them the Polka Dots which is just lazy to me. My wife called them Twister's after the game and I can see that. One of the other bulk buyers at the Outlet told me he was selling the hell out of them to his guys in Japan. They were the biggest thing going over there according to him. 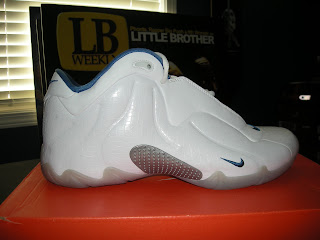 Bought At The Footaction Outlet Columbia SC
Wore these on Tuesday just to finish off the set. This is the last of the 3 pairs of Solo Flights I own and is probably the best colorway of the bunch. The white and blue looks really nice especially on top of the clear sole. That's enough about this shoe, I've been through it all before with the other two pairs. Nothing special so let's move on. 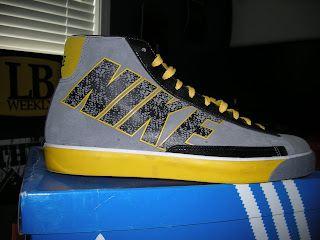 Rocked these on Wednesday as I hung out at the house and enjoyed my new couch which was delivered Tuesday. Trying to bang out the last few pairs of Blazers I have left so I can get them all moved to the new stash spot I have for them upstairs. Really like this pair, the grey, black and yellow look great together and I love that they have a big Nike printed across them as opposed to the typical Swoosh. Like when Nike varies it up every so often, makes things more fun. Got these back in October or November and wore them a good bit at first but had to let them sit after Wiz song blew up and all these clowns jumped on the Pittsburgh bandwagon because some rapper made a song. Bunch of clowns who wouldn't know who Heinz Ward was if he walked up and slapped them claiming to be life long Steeler fans all the sudden. Hate bandwagon bitches. So now that all that has died down I pulled them out and rocked them with a Grambling shirt I've been saving to wear with them. Did actually leave the house for a little so it was worth it. 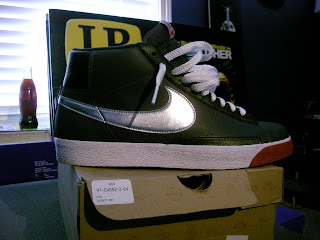 Today's Pair!!!! Finally caught up and up to date. Been trying to get here for a while now. As I said above, trying to plow through the rest of my Blazers and after today I only have four pairs left. One pair is not getting worn until Jackie Robinson Day in MLB so that leaves three pairs so I will be done by the weekend. I'll have all of them upstairs and can move some of the unworn stuff into their old spot in the closet. This pair is part of the Anthracite Pack Nike put out a few years ago and is one of the few pairs of Blazers I almost bought for full retail. Luckily I didn't  and I saved myself almost $50.00 as a result. Some people call these the "Olympics" due to the red, white, & blue along with the silver but that's not official. Just a nice solid Blazer in a simple but very effective colorway.