Back In The Mix Again...a/k/a I Been Slacking & Know It

Been a minute I know, sorry about that but between me feeling lazy for a little while and Spring Break having the wife and kiddies home last week things have been slacking on my end. But I awoke this morning to an empty house and felt the itch again so here with go with the catch up. Bumping some NY shit and feeling good so lets get started. Gotta be honest with you, been so long that not sure what day I wore some of these but I'll try to put the dates with the ones I remember. Gonna keep this pretty streamlined till I get caught up. 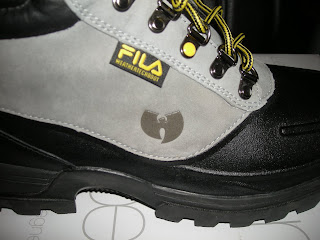 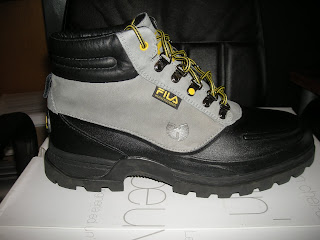 Rocked these on Non Nike Monday last month during the stretch of rainy days that always seemed to clear up by the time I left the house to start my day. Had these for a while now, soon as I saw them at the Footaction Outlet in NC I had to cop them for myself. As someone who graduated in '93 these Wu-Tang boots were right in my wheelhouse. Rocked 38 Chambers to death back then and still bring it out when I wanna feel a little grimy or am hanging with friends from that era. The week after I got these the Outlet in Columbia got these in and I moved a ton of them to guys around my age. Got them for $40.00 and flipped them for $60.00. This colorway did pretty well but the brown color did great. Had a pair of those in my size also but flipped them when I saw how they were moving. One of my problems, love shoes but love money too. Always tell myself that they'll get another pair in so I can replace them but sometimes that blows up in my face. Oh well. 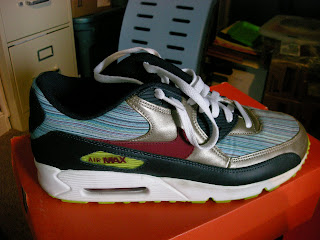 I know I wore these sometime between the March 29th & April 1st but not really sure which day starting that part of the list with these. Just a AM90 I got a few years ago when they went on sale at the Foot Locker in the mall my old record store was at. This was before I discovered the Footaction Outlet so I thought $59.99 was a great deal, later I found out I could have got them for $30.00. Joe Public (that means live and learn to those of you too young to remember Joe Public and their one hit). Love that Nike considers gold to be Blur but doesn't have a name for the crazy strips all over the toebox. Nice little shoe I rock when I'm bored and want some attention. 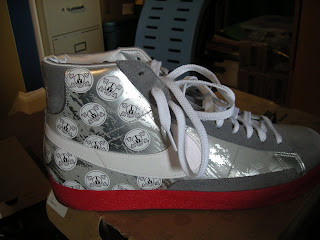 These fall in that same time frame as the last pair. These are some nice Blazers I've seen called the Ohio State's on a few sites due to the gray and red and round skulls stickers on the heel which bring to mind the helmets of the Ohio St Buckeyes (most over rated, over hyped team in history). I just grabbed them at the Outlet one day when I grabbed about 6 different Blazers they had in stock. Got a few UnderCrown shirts I got from there to that match the silver in the shoes so it was a no brainer to scoop them. Yet another Blazer in the stash, maybe I should count how many I have one day. 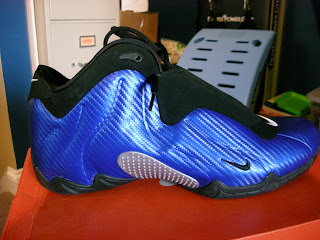 These got worn because my daughter picked them out for me. We played our lil' game where I don't put on any shoes in the morning and when we go to get in the car to head to daycare she picks a pair from the stacks in the garage. That morning I pulled out the two pairs of Solo Flights I haven't worn yet and she picked these over the white pair. Grabbed these from the outlet during the phase when my shoe business was really rolling and I would get anything that caught my eye. Liked the blue in these and knew not to many people would be rocking them so figured why not. Ended up with three different colorways. Good ol' days. 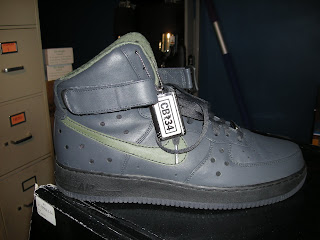 These were also picked out by my daughter. She told me to get a black box and I pulled these down. Got these during one of the really good periods at the Outlet when they had all kinds of stuff in stock and at the lowest price points. Got theses for only $40 and flipped them for $65.00. These are part of the Charles Barkley AF1 collection that came out a few years ago. I have one other colorway in them pack I might rock soon. The AF1 has always been a weird shoe to me, it just look funny sitting on the shelf. Something about the way the laces cut back in at the top. But on your feet you don't notice it so guess it works out. Just love getting any shoe that retails for $175.00 for $40.00 no matter what it is. According to Sneakerfiles.com these are the Leed High Pair from the Barkley Pack and released on 10/06/07. I do know the first time I ever saw them was at some mall in Orlando while on vacation with my wife, son, and sister-in-law. Think I bought 5 pairs of shoes while on that vacation but these weren't one of them. Worked out for me. 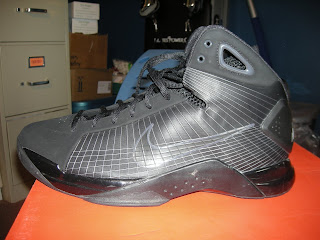 These are the first Hyperdunks Nike released and at the time were considered the Kobe Bryants before as he was the first player to really hype and promote these shoes. I got them the day them dropped just cause I thought they were the first tech shoe Nike had done in years that were good looking enough to rock as a everyday shoe. They are amazingly light thanks to the Flywire technology that debuted in these. Just a simple black shoe that still works to this day as evident be the fact that Nike hasn't really changed the shoe all these years later. 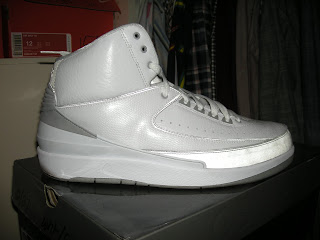 I do know that I wore these Saturday April 2nd when I was in a bad mood as my Kentucky Wildcats fell to the Huskies. Got these back when they dropped, was at the mall bright and early with a small group eager to get them. These didn't sell quite like I thought they would (and probably like Nike  Jordan thought they would), not really sure why unless it was due to the fact that Nike Jordan flooded the market with these 25th Anniversary models. Instead of spacing them out, they dropped a pair or two a month and it was hard for the average cat to keep up. Plus the colorway didn't pop the way most people expected. I liked them then and still do. Plus I think the 2 is an underrated Jordan model, it's just a nice clean model to me. I like the white and silver with the reflective trim around the toe. But I do know a lot of people were expecting this collection to be all white so I can see why they were disappointed. 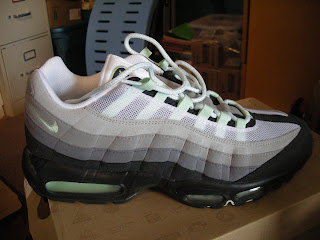 Biggest reason I remember exactly what day I wore these is that this is the pair I wore to Wrestlemania 27 in Atlanta GA. First time it was close enough for me to go and I made sure I was there. Bought my tickets soon as they went on sale last November and counted down the days. I know some, or most of you might be laughing at me but I don't care. It kicked all kinds of ass and me and my boy Mike had a ball. Rocked the "Mint" AM95's since they went with the Roc-A-Wear polo I was wearing and wanted something comfortable and simple for the evening. We had plans on getting something to eat before hand and wanted something semi nice for the restaurant but once we saw the lines we went straight to the Georgia Dome. Great memories and I was wearing on of my personal favorites on my feet to make it even better. Love the '95s almost as much as the '90s and this pair is a great colorway. Plus you can't beat paying only $70.00 for them.

Aight, enough for now. One week down, another to go. I'll handle that tomorrow while waiting on my new couch to arrive. Till then, Cheapsoles
Posted by cheapsoles at 12:31 PM