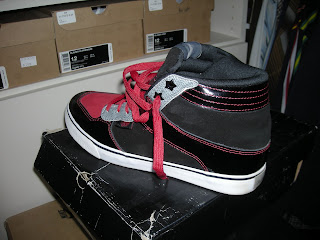 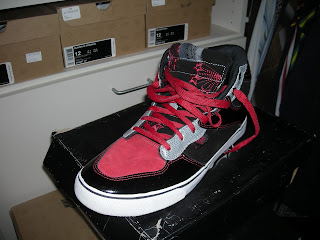 Today is Non-Nike Monday and I'm spending the day home relaxing with my wife while the kids are at school and daycare so I just grabbed a pair off the pile and it turned out to be these Public Royalty Funk Shooter's. I think this is just the third time I've worn them since I bought them over a year ago from the Footaction Outlet for only $10.00 (retail is $64.99). I bought them for two reasons, they were funky and different plus they were cheap. Never bought any to sell since I knew no one would buy a shoe they had never heard of no matter how cheap they were. That's something I've never understood about simple people, they'll wear the ugliest stuff (Coogi for example) as long as the name is mentioned by enough rappers but won't rock something that's actually hot and looks good because the name isn't right. Guess they would rather follow then lead.
Speaking of leading, I have to congratulate Trevor Baynor on his improbable and amazing win in the Daytona 500 yesterday. The kid is just the second driver to ever win the Daytona 500 the first time he raced in it. And to be honest, the first person to do it was Lee Petty in the very first 500 ever run so that really doesn't count does it. And yes half of the field, including a lot of the top drivers, was taken out early in the race but he earned that win. He was at the front all race long and whoever drafted with him drove straight to the front all day. The kid can drive and has great talent plus he is pretty good with the media and can be a huge shot in the arm to the sport.

On to my random thoughts, how long until Blake Griffin gets a signature shoe? And can we get Kevin Love a model with a real sneaker company too? Can't we go back to the day when Nike was making signature shoes for everybody without really making signature shoes for everybody? The Shake NDestrukt was Dennis Rodman's signature shoe without being called the Dennis Rodman. The Nike Air Force 180 was David Robinson's signature model without being called his signature model. Gary Payton had the Payton Zoom Flight "Glove" and Barkley had the CB Max 94. Just realized while watching Real Talk that Kevin Smith rocks Jordans which makes him even greater. Am I allowed to slap these little children who keep thinking Lil wayne is the greatest rapper ever? Look, I know dude has talent and I like his stuff most of the time but seriously, he's not doing anything that guys like Scarface and Outkast havent been doing for years. It's just that most rappers have dumbed down their lyrics to the point that actually having a little intelligence in your lyrics makes you great. How come Lebron seemed to be the only player on the East Squad to give damn last night? The Celtics guys seemed to think it was a big joke, Dwight Howard a/k/a "The Big Overrated" didn't even bother to show up, and everybody else was trying to make a name for themselves. I'll give Joe Johnson some credit too but he's Joe Johnson so he was just happy to be there. And can someone please explain to Chris Bosh his role? What the hell was he doing taking a three at that point in the game? And why exactly is Carmelo such a huge get for the Knicks? Isn't he exactly the same as Amare? They both  score a ton but can't defend or rebound. I know people said Lebron and D-Wade are the same type of player but the both score, pass, rebound, and defend so they can work together but not sure how Melo and Amare fit togther. Enough for now, Cheapsoles.
Posted by cheapsoles at 9:14 AM