Once again, rain has canceled Nike SB Friday so instead I went with these Timberland Woodbury Boots. I got these last November from the Footaction Outlet for $60 (retail is $120) and they quickly became a every day favorite especially during the nasty weather at the end of last year. They aren't super flashy or exclusive, just a good, solid, waterproof, outdoor boot which I'll get use out of for years to come. 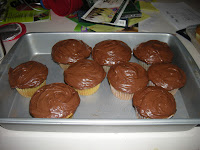 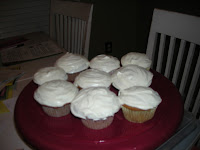 Decided to go with the store bought frosting for my cupcakes I made yesterday for my son's school. I'm just not a huge fan of homemade frosting, just tastes off to me for some reason. I did make a slight modification to my cupcake recipe yesterday and according to the reviews was a good change. The original recipe called for a cup of buttermilk which I changed to applesauce when I first used it. Yesterday I changed the applesauce to fat free yogurt and they turned out great. They just have a unique flavor to them that really sets them off. Frosted half of them with chocolate icing and the other half with vanilla icing for those weird people who like vanilla for some reason. Cakes are always supposed to have chocolate frosting. The cake can be vanilla but the frosting should always be chocolate. Always. Hopefully they won't poison anyone tonight at Family Fun Night at my son's school. And hopefully we'll win some prizes in the Bingo games tonight too.
Now as for yesterdays trades, loved what OKC did but not sure about Boston, need to see how that plays out before I pass judgements. The Memphis / Houston trade was a sneaky little deal which might work really well Memphis if they continue playing as well as the have been. I see the point of what MJ did with trading Wallace and that trade really helps Portland. The Bobcats needed to be blown up or they would just flounder in the 7 - 8 seed area forever. And Portland really strengthened their team with a great complimentary player in Wallace. As for the rest of the trades, they same to have been made just to have been made. Typical NBA GM moves, just do something to fool your fans into thinking your doing something.
Oh well, later this afternoon I'll be throwing up something on all the women's shoes at the Footaction Outlet plus a few men's Polo Boots from DTLR so make sure you come back and check it out, Cheapsoles
Posted by cheapsoles at 11:48 AM