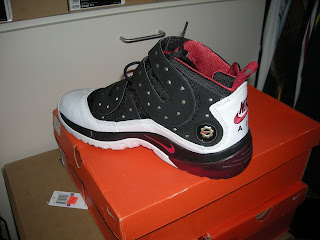 Getting this up a little late in the afternoon but I was trying to get everything out of the way this morning so I can just sit back and watch hours upon hours of TV. The Daytona 500 is seconds away from starting and after that I get to roll right into the NBA All-Star game. My wife and son are gone on a play date and my 2 year old daughter is passed out in her room for a little while. Made my garlic infused olive oil and ginger infused olive oil made this morning so my day is free and clear until I cook dinner tonight. And since I'm not doing anything today but watching racing & basketball figured I might as well get one of those odd pairs I have in the stash. These are the Nike Zoom Sharkley which is a hybrid of the Nike CB Max 94 (Barkley's) and the Nike Shake NDestrukt (Dennis Rodmans's). I have three pairs of these for some reason. Probably due to my love of the Barkley's and the fact that I got them for $30 each. That is a problem I have when I get a pair of some random shoe at the Footaction Outlet. After I get that first pair I feel the need to get every colorway I see up there. I have issues, I know. These shoes retailed for $88.00 and as I said earlier, I paid $30.00 for them. The colorway is listed as Black / Varsity Red / White / Metallic Gold.
The race is pretty exciting so far and loving the new Transformers spots they keep showing. Looks like Bay has figured out what he did wrong with the second one. That last Transformers movie was a piece of crap and was hard to watch but hopefully this one will be much better. Looking forward to the All-Star game tonight. Still think Blake is going to show out tonight like he did last night. Oh well, take back what I said about the race being exciting, they just had the big one really early in the race and half the cars are done. Not just half the cars but it was most of the good cars. Going to be a weird one. Back to Blake, he did his thing last night, just straight power dunks and insane height and leaping. Think this is his national coming out party. The casual fan is going to learn about the next big superstar today. I can easily see him getting a signature sneaker next season. Just in time for me to start buying sneakers again. Till tomorrow, or later this afternoon depending on how I feel, Cheapsoles
﻿﻿﻿﻿﻿﻿
﻿﻿
﻿﻿