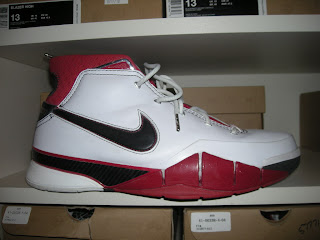 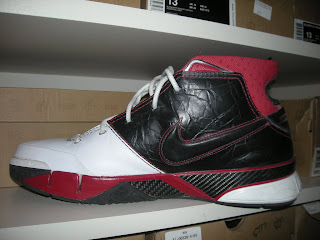 So today I decided to go back a little bit to 2005 and rock the Nike Zoom Kobe 1's which wear Kobe's first signature model with Nike. Up until then he had been wearing special edition's of the Air Zoom Huarache 2K4's. Kobe left Adidas in 2003 to sign with Nike however just months later he was charged with rape in Colorado and Nike shelved his shoes and all promo materials for a year. After rebuilding his image by just destroying everyone on the basketball court Nike decided to release his signature model in 2005. Oddly, instead of using a Laker themed colorway for his first release they instead went with this white / black / varsity red colorway which looks quite nice but has nothing to do with the Lakers or match his jersey in any way, shape, or form. 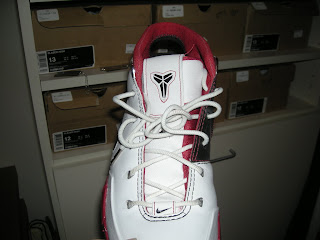 The shoe was $130 retail which seemed a bit high but not to unreasonable until Nike, in their infinite wisdom, dropped the Zoom Air Legend which was almost the exact same shoe for only $85.00. At that point it was almost stupid to buy the Kobe's for $130 when you could buy the Zoom Legends for $85 and most people would never know the difference. Just another in a long line of decisions by Nike in which they don't seem to mind screwing over their true sneakerhead fans for the casual 1 or 2 pair a year buyers. But no matter how hard they screw us we keep going back so I guess we can't complain can we.
Now a few words about Nike's MLK Day lineup. If you haven't seen it you need to go to nicekicks.com to check it out. They are the only site I've seen with pics of the entire lineup including the Jordan Brand and Converse shoes in the series. While the sheer volume of the shoes is impressive the color combination leaves a little to be desired. Black with gold accents just seems a little simple and plain. Plus lets be honest here, nobodies really running out to buy special edition HyperFuse & HyperDunks are they? Or Jordan Brand shoes that nobody buys regular versions of to begin with. At least if Nike varied up the colorways or made them have a little more pop to them somebody might consider it but these just seemed to plain for me & most people I talked to. The only reason the Black History Month Jordan Retro 3's will sell is do to the limited number being made not the colors. Most people I've talked to don't actually like the shoe but since they're so limited people want them just to say they got them. But this is what Nike and Jordan do, they learned long ago that the shoe can be ugly as hell but if it's limited it'll sell. Oh well, have some sale info for you later today, Cheapsoles.
Posted by cheapsoles at 6:31 AM