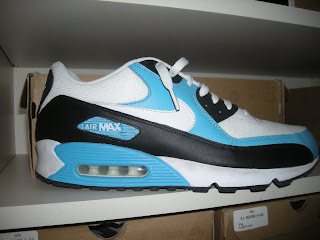 Today's post is a little late but that's my fault, didn't get to bed until 3:00 AM last night and had to get up at 7:00 to take my daughter to daycare. She has to be there by 8:30 or she'll miss breakfast and I'm not spending all that money every week to have her not get everything she can from that place. So after sleeping late by accident and jumping out of bed at 7:45 I just threw on these Air Max 90's since they were the pair on top of the Air Max 90's stack in the closet and easily available. Not that I minded as the 90's are possibly my favorite Nike ever. Just something about the lines and timeless style of it that really speaks to me (just lost my man card I know). Plus Nike hasn't watered them down like they did with the AF1's nor was the shoe ever considered the super hot shoe so it never got played out by the hypebeast kids.

This pair's official coloway is listed as white / white / black / vivid blue and they retailed for $92.00 when they were released in 2008 or 2009, not totally sure which year it was. I picked them up last year from the Footaction Outlet (yes, that place again) for only $30.00. Debated on getting them for a little bit I have to admit. Really like the colors on the shoe but they are called the "Panthers" 90's by people around here for a reason. The shoe's colors are the same as the Carolina Panther's (worst team in the NFL this year) and as a Atlanta Falcons fan ( yeah, yeah, Gren Bay just scored again...ha ha) it was hard to swallow that and get these. Especially around here where there are so many Panther fans and they assume everyone is too, well except for the bandwagon Cowboys's & Steeler's fans that seem to crawl all over this state. Half of those guys have never left SC let alone been to Dallas or Pittsburgh. I'll admit I'm from South Carolina and am a Seattle Mariners fan but I have actually been to Safeco Field and it's not like Seattle is any good so who would jump on that bandwagon right? 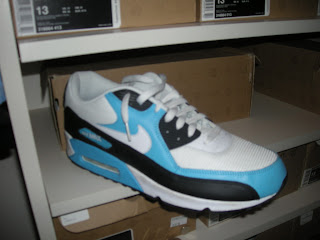 Well that's it for now, don't forget that the Jordan Retro 3 "Cements" drop tomorrow so make sure you call your spot today to see when their opening and get there early tomorrow. Good hunting, Cheapsoles.
Posted by cheapsoles at 10:06 AM