In case any other of you noticed, I didn't post anything yesterday because I didn't wear any shoes yesterday. I was a little under the weather and so was my wife so we both just hung around the house and took it easy. We're both feeling much better so today is back to normal. It's Non-Nike Monday and today I just grabbed a pair of Puma's out of the pile and threw them on as I headed out the door to drop my daughter off at daycare. 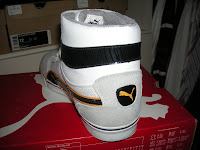 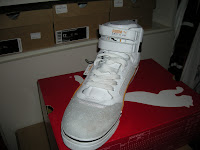 These Puma's are yet another pair of $10.00 shoes from the Footaction Outlet. They originally retailed for $75.00 so I figured they were worth blowing $10.00 on. Saving $65.00 on a pair of shoes will make any shoe seem worth buying. I tend to do that a lot up there but as I've said before, if I only wear them one time then I figure I got my money's worth out of them. As a matter of fact, I've had these for over a year now and this is only the second time I've worn them. Now that I look at them, I actually like them and might have to move them to the top of the pile once this little exercise is over. They're a cool, funky shoe that if you know what your doing can look really good.
During yesterdays lounging I decided to start another blog that nobody will read called A CD A Day (acdaday.blogspot.com). I was going through my CD collection on my laptop and external hard drive and I realized that I have tons of Cd's and yet I have never listened to the majority of them all the way through. And when I say tons of Cd's I am not kidding. I worked at and later co-owned a record store so I used to get everything and mostly for free. I brought home stuff I knew I would never listen to but since it was free I took it home anyways. Throw in all the stuff I have bought and it's a pretty massive collection. It got to a point a few years ago that I had to go digital just to save room. i can't have shoe boxes everywhere and thousands of Cd's too. My wife loves but there are limits. So I'm about to pop in my first CD, clean up the house, and start today's first entry into acdaday.blogspot.com. Till tomorrow, Cheapsoles
Posted by cheapsoles at 10:41 AM