So I'll be honest, the last couple of posts haven't been all that great. Just been a little busy so kind of rushed them plus the shoes just didn't really excite me (or probably anybody else for that matter). Also there hasn't been any new info on sales at the Footaction Outlet or DTLR lately so haven't written a sales post in awhile. Plan on going by both spots later today so hopefully things will pick up soon.
Now as far as the Super Bowl and my thoughts, I said in the title at least it was live and I was referring to Christina Aguilera and her National Anthem debacle. Yes she flubbed the words, forgot a line, and changed the words but at least it proved she was actually singing it live.And yes that is a shot at Whitney Houston and her anthem performance from 1991. I hate how everybody acts like it was the greatest anthem performance ever and goes on and on about it but nobody ever mentions that it was lip synced. She went in the studio before the game and recorded the anthem then just lip synced it for her performance. I'm not saying it didn't sound amazing but it's easy to sound that amazing (for her and other singers not us mortals) when you can record it over and over and edit the best parts of each take into one track. So yeah Christina screwed up,  but at least she had the nerve to do it for real. By the way, am I the only person who thought Christina looked like Cyndi Lauper up there? And I don't mean "Girls Just Wanna Have Fun" Cyndi but current right now Cyndi. Not sure if that's an insult to Christina for looking like a 50+ year old woman or a compliment to Cyndi for looking like a 30 year old woman. Maybe it's a little of both.
Now as for the other musical performance that night, that was one of the worst halftime shows I can remember since those old MTV spectacular crapfests back in the day. Full disclosure, I hate the Black Eyed Peas so I might be a little biased but I'm not the only person who thought it was bad. I haven't read a glowing review of the show yet. Now when I say I hate BEP I guess I should clarify, I hate the Fergie version of BEP. Their first two Cd's when some true hip hop albums from the non gangsta set of West Coast MCs. Then they said the hell with respect, added Fergie and began the downward slope in being complete corporate sellouts. Most of their current fans have no idea the first 2 Cd's even exist. So yeah I didn't expect much and wasn't looking forward to the show but even I wasn't ready for that pile of turds they put on the stage. They  did the same shctick we've seen from them on every award show, and they've been on EVERY award show. Plus flashing lights and people with light bulb outfits don't make up for talent. 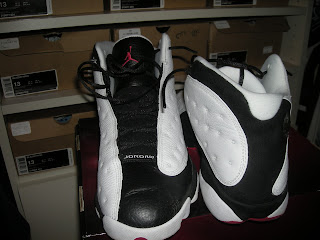 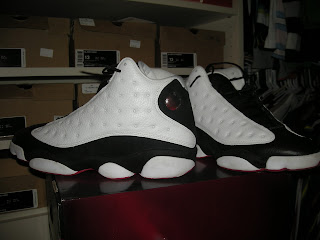 Now as for today's shoes, these are the Retro 13's from the Colliezone (Countdown) Package. The 13 / 10 was the first Countdown Pack released and is the only one I own. I thought the idea for the packages was pretty good, (the numer of the 2 pairs in the pack add together to equal 23, for those of who don't know the idea) but the execution wasn't that impressive. Seriously, how many pairs of white, black, and red Jordans can somebody have? The package retailed for $310 when it first dropped in January 2008 and are in the $450 to $500 range on eBay at this moment. Flightclub.com also has just the 13's from the pack for $313 and the 10's going for $210. Personally I hate when people who break packages, just seems wrong to me. It just takes away from the entire point of the package. I can't respect any so called sneakerheads who would do that, just seems disrespectful. These 13's are pretty nice quality especially when compared to some of the later packages released later on. White leather upper with a combination of black nubuck and black leather along the bottom and some red accents placed on the tounge and sole. Nice little colorway and I don't mind the white leather on the upper, I am not a fan of the black leather upper on the 13's at all. It just looks fake to me, prefer the mesh like Jordan used on the recent "Altitude" Retro 13 release. I know it's not the most popular opinion but I'm used to having unpopular opinions.  Such as my opinion that the 13 is the second most overated and over hyped Jordan after the 11. Yes I said it, the 11 is overated. It's nice but it's not the greatest shoe ever. It's just the main shoe that Jordan limits so it seems even more important then it is. And I can't lie, I run out and get them ever December when they drop so I guess I'm part of that crowd too. Oh well, time to get out of the house and see what's new for today. Till tomorrow, Cheapsoles
Posted by cheapsoles at 8:09 AM