New Rules, New Format, New Days or I Actually Have Things To Do Now

To borrow a phrase from Bill Maher, Welcome to New Rules. I actually have quite a few things going on these days so from now on I will be putting up a new post on Mondays, Wednesdays, and Fridays from now on. Plus there will be some changes to the format to make it a little easier for everybody. So with all that done let's get started.
Friday: Nike Blazer Premium SB
Colorway: Green Spark / Green Spark / Pimento 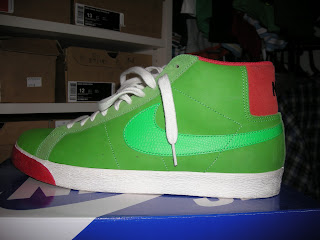 Cost: $80.00 / Paid: $35.00
Purchased from: Nike Outlet (Myrtle Beach SC)
Scooped up these SB Blazers about a year ago on a purchasing trip to Myrtle Beach SC for merchandise to sell when I had my shoe business. I picked up two pairs of these in sizes 12.5 and 13 with plans to resell them for $45.00 but I also knew they might not move because of the colorway so I made sure to get them in my size. Already had a Ecko shirt I was selling that matched the shoes perfectly but didn't sell either pair so I kept the 12.5 for myself and let my boy at DTLR get the 13 at cost. Nice shoe I wear on semi-regular basis since I have a nice shirt to match it with. 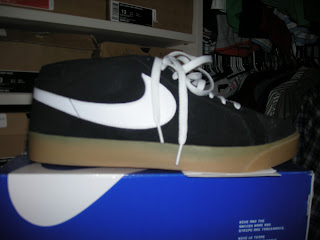 So this shoe is a pretty new cut from Nike on their Blazer SB Model that is basically a mid cut. They are a pretty basic shoe, it is a Blazer after all, and so far have only been released in basic colorways. The only reason I picked them up was because of the new cut. Just thought they looked funky and I knew most of my friends didn't know about them and had never seen this kind of Blazer. Just a simple black and white colorway with a gum bottom sole which was the reason I went with this colorway. Gum bottoms always make any shoe better. 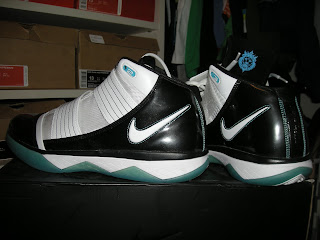 Went with these Zoom Soldier III's on Sunday mainly to get them out of the way so I can take them upstairs and bring down a pair from up there. These shoes are actually Lebrons and even though the box has a huge LBJ on the top, and the shoes have the lion head logo and Lebron's name on them Nike doesn't use his name in the shoe title. These are marketed as Lebron's street ball shoe and are a pretty good seller for Nike. I just grabbed these because of the price for me at the Footaction Outlet and the Baltic Blue color just caught my eye. Only worn them a few times since I got them and in hindsight I probably let my buying zeal take over that day. I bought about 6 pair that day and probably should have left these on the table. Oh well, they're mine now. 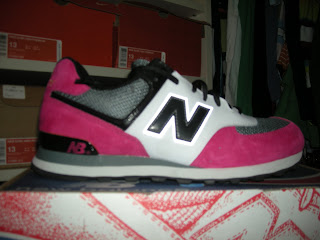 I know I did away with Nike SB Friday's but I am still going with Non-Nike Mondays and today I went with these New Balance 574. Picked these shoes up a few years ago while my boy was working at Footlocker and they had these on clearance for $9.99. I know some people would be scared to rock them because of the pink in them but that is what made me get them, well that and the fact that they were $9.99. I'm not turning down any shoe if they are $9.99. Just a funky shoe I throw on every so often to see what kind of looks, stares, and comments I get during the day. I have to go to Home Depot later today and I'm pretty sure at least one or two people will do a double take. Always happens. Till Wednesday, Cheapsoles
Posted by cheapsoles at 7:22 AM